Adrift on the Nile 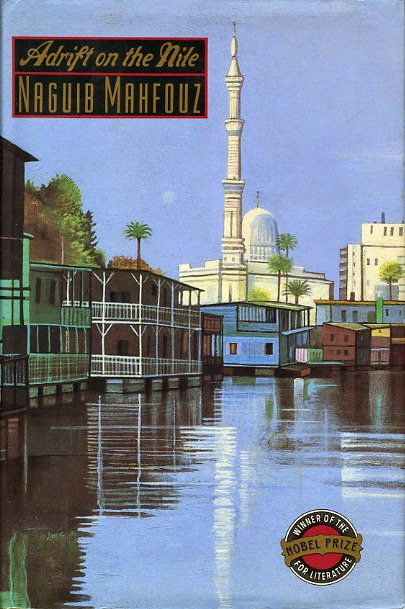 Adrift on the Nile, by Naguib Mahfouz

Storytime: one of the titles on my Classics Club list is The Cairo Trilogy, by this Mahfouz guy.  It's huge (being 3 novels in one volume), so I thought I would try one or two of his shorter novels first, to see what I thought before committing myself to 1000 pages.  I checked out this novel and one titled Arabian Days and Nights, both quite short.  This book is billed as "an exciting and dramatic change of pace" from the Cairo Trilogy.  "Exciting and dramatic" is exactly what the story is not, so I sure hope the blurb meant that the style is different, not that the Cairo Trilogy is a slower read than this.  On to Adrift on the Nile...

Anis Zaki is a mid-level government office worker during the mid-1960s--the Nasser years.  He lives on a houseboat on the Nile, and every evening his friends visit; they are all educated, fairly well-off writers or filmmakers or artists left behind by the changing times.  Every night they smoke a lot of opium and talk a lot, arguing about art and love, and they leave the rest of the world strictly alone to take care of itself.  A couple of minor things happen, but mostly nothing until right at the last part of the book, when they decide to take a joyride.

So, pretty much this story is a bunch of people sitting around and getting high all the time.  It proves that stoned people are only interesting to other stoned people.  Anis can't do without his drug at all, and is high 24/7, which is a bit hard on his job performance.  And then they take the joyride and the result is what you might expect from a bunch of stoned people driving too fast.

It seems to me that the novel's theme is captured right on page 4, in the opening scene when Anis gets in trouble at work.  He is supposed to have written out a document, but he has failed to notice that his pen ran out of ink on the first line.  He wrote the whole thing, but the pages are empty.  Likewise, Anis and his friends think they are creating meaning and friendship during their talkative evenings on the houseboat, but in fact they are creating nothing but emptiness and meaninglessness.  Just as the title says, they are adrift.  But this novel about people adrift is not actually very interesting to read.


I'm not a Mahfouz fan so far.  I'll give the other one a try, but if that's not to my taste then I'll have to trade the Cairo Trilogy off my list for something else!
African literature modern fiction