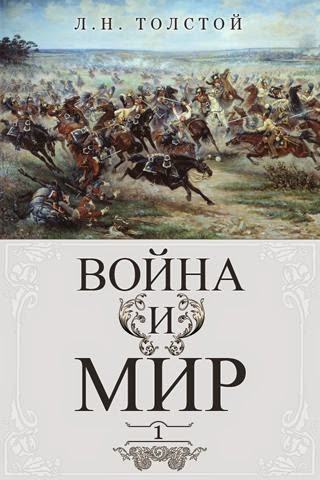 War and Peace, by Lev Tolstoy,  translated by Pevear and Volokhonsky

It took me 3 months, but it was completely worth it.  I'm not sure else what to say about the mother of all chunkster classics, but I'll give it a go:

We've got a cast of characters in Russia during the Napoleonic Era.  It takes a while to get to know them all!  There are three or four main families and their paths touch here and there over the course of the novel, eventually cohering into one.  The story takes years, and some of the characters change very much.  We get to know the main players so well that we sympathize with them and want them to be happy even when they're not choosing very well.

There is a lot about the war, first in Prussia, then in Russia itself.  Napoleon himself is a character, and Tolstoy has some very pointed things to say about "great men."  By the end, he is expounding on power, freedom, and war--the epilogue, which you hope will have more story in it, has essay, story, and lots more essay.  But the story part does end on a satisfactory note. 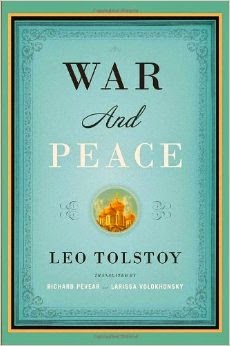 Tolstoy refused to call this work a novel.  I'm not sure what he did call it, though.  Apparently, he read Tristram Shandy (and Sterne in general) and admired it, and the footnotes say that it's "seen as a formal precursor to War and Peace."  I found this out after deciding to put Tristram off until I was done with Tolstoy, so then I felt silly.

This was not an easy novel for me to read, and I didn't love it as much as I did Anna Karenina, but I did enjoy it.  I got to love the characters, I was interested in what they did, and most of the historical war parts were quite interesting--it's just that it is not an easy or fast read.  You've got to commit.  I'm sure not everyone would think the commitment worth it, but I did.  I will certainly re-read it one day, and I hope that will be soon enough that I won't forget who is who!  I would like to be able to remember everyone's fates from the beginning next time.

I would have had an easier time if my giant, floppy paperback had been in two volumes; that would have helped a lot, because I could really only read it in two places--I had to either be sitting on the couch with plenty of time, or else in bed and therefore already tired.  Since my normal MO involves carrying a book around with me and reading on the go, I couldn't make fast progress.

An amazing, sprawling, masterwork of a novel.


There is no greatness where there is no simplicity, goodness, and truth.