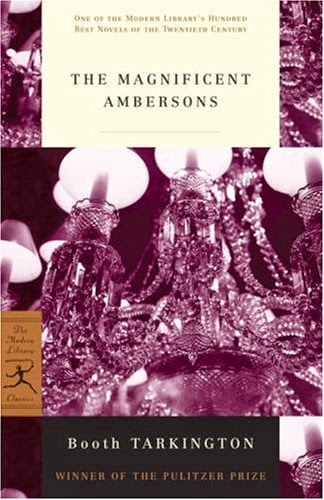 The Magnificent Ambersons, by Booth Tarkington

I've heard people praise this novel quite often, but for some reason I never wanted to read it myself until I happened across it at the library a little while ago.  Guess what, this is a really good novel!  I liked it so much.

The Ambersons are a stupendously wealthy family in a small Midwestern city.  They splash money around like water.  The daughter, Isabel, marries a nice, quiet man who is not her True Love, and has one son--George, who grows up like a prince, worshiped by his mother.  His self-confidence and arrogance are really astounding, and his ambition in life is to be a gentleman on the family fortune.  At the same time, he falls in love with a lovely girl (the daughter of the man Isabel didn't marry), whose father is an up-and-coming automobile manufacturer.  Lucy loves George but has doubts about the wisdom of actually marrying him.  And then, George manages through his pride to destroy the lives of everyone he loves most.

George is really remarkably unlikeable for a very long time.  It's a mystery to me how he can expect Lucy--an active, assertive girl, American through and through--to like the idea of having a 'gentleman' for a husband.  He doesn't want to do anything but be rich.  He's a trust-fund baby.  No wonder she balks at the idea of marrying him.  He is also completely blind to anyone's point of view but his own; he truly cannot understand anyone else's thoughts that don't agree with his.  (In an Agatha Christie novel, it would get him murdered.)

Tarkington handles all these people in such a compassionate, understanding, forgiving way.  George has to pay for his pride, but even as you see the terrible mistakes people are making, Tarkington shows you that they are people doing the best they can, and that the most important thing is to be kind.  It's really nice.