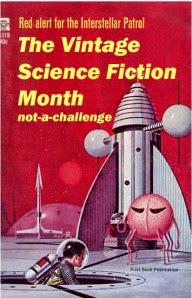 People are already putting up their challenges for next year, which is very exciting but also makes me feel like I do when I realize that Christmas is looming at me and I haven't actually done anything about it yet.  It's too soon!  I can't think about that yet!  But I am going to try to start posting on things for next year, if only so that I feel organized and accomplished.

Late last year I discovered the Vintage SciFi Not-A-Challenge and was enchanted.  I read a bunch of PKD and Bester, and a Clarke.  Now I'm going to do it again!  The Little Red Reviewer says:


The What:
Anything or anyone who created science fiction, or something speculative fiction-ish that was published (or recorded, or put on TV or the silver screen) before 1979.  It can be hard scifi, or not. Have aliens, or not.  Fantasy is OK too....


This January, I'm going to have two goals: to read some Heinlein for the first time in my life, and to read some iron-curtain SF.  I have a Strugatsky book and some Lem in mind.  I so look forward to this as a fun way to kick off the year!