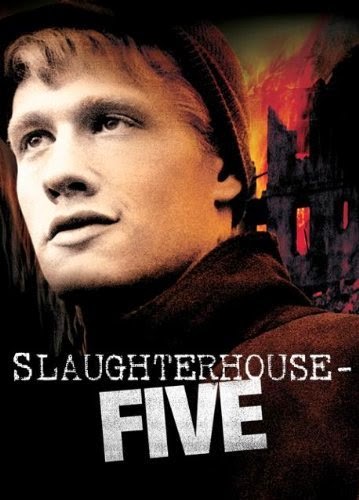 The Back to the Classics Challenge has an option for reading a classic, and then watching a movie adapted from it.  Several months ago I read Kurt Vonnegut's Slaughterhouse-Five, and I finally got around to watching the movie.

The film was made in 1972 and works hard to be much like the novel; Vonnegut called it "a flawless translation."  Of course, it can't fit everything in there.  The largest difference (besides the part where you never see a Tralfamadorean, because that would be distractingly bad) is that the phrase "so it goes" never shows up once in the movie, while it is scattered everywhere in the book.

It's a surreal puzzle of a movie, because Billy Pilgrim is unstuck in time.  Luckily he explains this at the beginning of the film while writing a letter, and the rest of the film jumps every few minutes--or sometimes every few seconds--between Billy's time in World War II, his marriage and children, and various other events.  For the most part, each storyline proceeds in order, though.  I wonder what someone who hadn't read the book would make of it, but I think it would make reasonable sense.

I remember seeing this film in class my sophomore year of high school, but it must have been a collection of clips or perhaps just one clip.  There is no way you'd show the whole thing in a high school class.  It's...very 70s.
film modern fiction