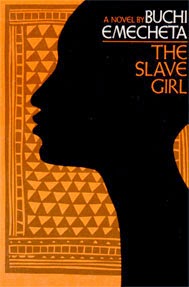 The Slave Girl, by Buchi Emecheta

I really liked The Joys of Motherhood, and checked another Emecheta novel out right away, where it sat on my overstuffed library shelf for a long time before I picked it up.

Like The Joys of Motherhood, the story of Ogbanje Ojebeta starts with the story of her mother, who has given birth to many girls, all of whom have died at birth.  When this one looks as though she might stay, the parents shower her with charms, magic, and special tattoos to shield her from harm.  But she is only about six when both her parents die suddenly (I think it's the 1918 flu epidemic, but it's not entirely clear), leaving her with her brother, a young man averse to responsibility and desperate for money.  He sells Ojebeta to a wealthy relative, Ma Mee, where she becomes one of a group of slave girls who run a market stall, sew, and do all the household work.

Ojebeta does not have a horrific life as a slave, but it's no picnic.  Emecheta shows a whole variety of social problems in the lives of the girls; the oldest becomes the victim of the master's advances and eventually disappears, to reappear sometime later as a mistress with a baby.  One is a twin from a culture that rejects twins, and her mother saved her life by selling her.  Few of the girls know where they came from, and Ma Mee considers that she is doing a service, since how else can unwanted children survive?  Although Ojebeta is not treated differently than the other girls, she is at an advantage for other reasons; for one thing, she remembers her home and knows that she could go back.

As she gets older, Ojebeta catches the eye of the son of the house, who offers her marriage.  At the same time, her mistress dies, leaving the household in chaos.  Ojebeta suddenly has a choice about what she will do with her life.

All this takes place against a background of a changing world, as the people of Nigeria adjust to the transition from Portuguese power (neglectful, and with a lot of slave trading) to British power (interfering, and abolishing slavery, which annoys a lot of people since it was a lucrative trade).  Most people don't have to deal too much with the colonial government, but it's there all right.  The end of the novel is soon after the end of WWII, so independence is something to look forward to, but not yet a realistic idea.