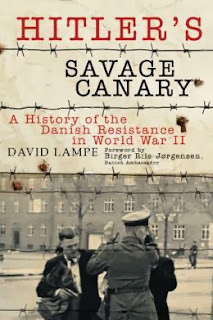 Weird title, right?  When Germany invaded in April 1940, Denmark offered no resistance, reasoning that fighting would be pointless for such a tiny country. Churchill contemptuously called Denmark "Hitler's tame canary," but later he had to admit that the Danish Resistance was extremely effective and helpful to the war effort.  In fact it was so effective that the Allies never felt it necessary to bomb Danish factories, trains, and airports that the Germans had taken over.  Lampe collects stories from the Resistance and lauds many clever and brave Danish fighters; this book was originally published in 1957, so he was really interviewing many of the people involved.

Lots of very exciting stories here!  There's a soldier who rebuilds a dismembered airplane, takes off right over the heads of German guards, and flies to the UK through icy conditions with only a couple of instruments.  Resistance members who invented tiny radios that could be used to send intelligence to Britain.  Explosives for sabotage, smuggled in lunch packets.  Parachute drops of supplies into fields right next to German outposts.  And the story of how Niels Bohr was smuggled out, even though he was really terrible at being undercover.  There are many more fascinating bits of history.

I've always thought it was really cool that one of the major Danish resistance groups was called Holger Danske.  Holger Danske* was a legendary Viking and friend of Charlemagne who is said to be sleeping under Kronborg in Helsingør.  When Denmark stands in its greatest need, Holger will awake and save his country.  There is a statue of him you can see in the cellar of Kronborg--I've been there.  So it was cool to call the Resistance after him, wasn't it?


If you're interested in World War II at all, this is a great read.


*In English, he's called Ogier the Dane, and you'll find him in the Song of Roland. Helsingør is the Elsinore of Hamlety fame, but the actual castle is called Kronborg.