By Jean - December 20, 2013
I know I said I wouldn't join any more challenges, but Deseree at Dusky Literati posted one I just can't ignore.  I can't post the whole thing here, so go take a look.  Deseree says: 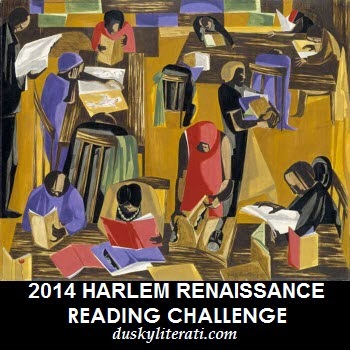 The Harlem Renaissance was a cultural movement that spanned the 1920s. At the time, it was known as the “New Negro Movement”, named after the 1925 anthology by Alain Locke. The Movement also included the new African-American cultural expressions across the urban areas in the Northeast and Midwest United States affected by the Great Migration (African American), of which Harlem was the largest. Though it was centered in the Harlem neighborhood of New York City, in addition, many francophone black writers from African and Caribbean colonies who lived in Paris were also influenced by the Harlem Renaissance. The Harlem Renaissance is generally considered to have spanned from about 1919 until the early or mid-1930s. (Source: Wikipedia)
Last year I read quite a few books by authors of the Harlem Renaissance and in 2014, I want to delve deeper.
Details of the Challenge:
I will just sign up for Level 1, 1-5 books.  My library has a couple of really nice collections of novels from the 1920s and 30s, which tempted me earlier in the year.  Here's my chance!
Harlem Renaissance challenge