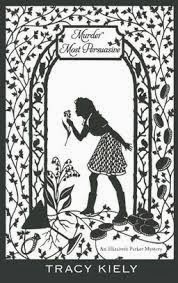 Murder Most Persuasive, by Tracy Kiely

This is the third mystery in the Elizabeth Parker series, but I've never read the others.  Elizabeth is a Jane Austen-loving gal who accidentally gets embroiled in mysteries and solves them while her friends warn her not to meddle.

Elizabeth's family gets involved this time, though, when a body is discovered under the swimming pool of their former property.  The body turns out to be Michael, who disappeared 8 years ago after embezzling a million dollars from the family business.  Or, maybe he didn't, since he seems to have been dead the whole time after all.  Police investigation brings Elizabeth's cousin's former love back into her life, but the cousin is a suspect.  Enter Elizabeth and her knack for putting clues together!

It's a reasonably good mystery, with a bunch of complicated family connections.  All the cousins and aunts and stepmothers had me confused some of the time, but most of the characters are easy to distinguish.  The hook for this series is the Jane Austen love, which I didn't even get when I checked the book out.  Elizabeth and her aunt are forever quoting Persuasion at opportune moments, which is actually a really nice plus.  So many "I love Jane Austen" stories swoon over the men and the dresses, and don't do much else.  Then, the story also echoes the plot of Persuasion.  The suspected cousin is a modern Anne Elliott, with the detective Joe as Captain Wentworth.  And Elizabeth's sister Kit is Mrs. Charles Musgrove to the life, which is amusing and distressing at the same time.

I presume each of Elizabeth's other adventures riff on a different Austen novel.  It so happens that I got the Persuasion story, and come to think of it Persuasion is one of my favorites, so I read that too.  I'll tell you about that tomorrow.
mystery