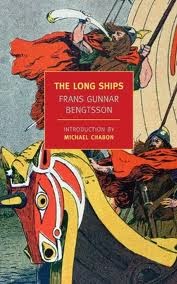 The Long Ships, by Frans Bengtsson

Folks, this book is fantastic.  Now you know, so you will go out and read it too, right?

This is the life story of Red Orm, who is captured as a teenager and ends up joining a Viking raiding ship as an equal.  So his years of adventure begin, pillaging, fighting, being captured as a slave, working as a bodyguard...Orm travels around the Europe of 1000 AD and even meets up with a few eminent people.  I was happy that he spent quite a bit of time at the court of Harald Bluetooth.  Eventually Orm even travels to Kiev.

The really wonderful thing about this book is that Frans Bengtsson gives an amazing picture of life a thousand years ago, and he does it amazingly convincingly.  As far as I can tell, Bengtsson really understood how Vikings thought.  (Not that I would know, but he sure is good at conveying that impression and I think he knew his stuff.)  The whole time, I felt convinced that people were really like that much of the time.

This is a really violent story, as you might expect.  There is a lot of smiting, and everyone thinks of it as good entertainment, or really funny.  So if you're sensitive about violence you probably shouldn't read this story, but I think it's a good portrait of the world at the time.  There was so much fighting and feasting and drinking, in fact, that I was reminded of a joke some friends had long ago, about the Vikings' favorite song.  It was sung to the Irish Washerwoman tune and simply went

Anyway, this was a really great book.  I highly recommend it.