I'm getting all excited about starting the Arthurian Literature Challenge!  I hope you are too.  One or two people have mentioned that they might like to read some non-fiction analyzing the Arthurian tradition, but aren't sure what a good book would be, so it's time for Howling Frog Library Services to swing into action and offer a few titles.

It's not as easy as I had expected to find books chronicling the development of Arthurian literature, though histories of 5th-century Britain abound (see below).  The titles I have found are quite expensive and mostly owned by universities, so I hope you can  get them through ILL at your friendly neighborhood public libraries.  Oxford and Cambridge have competing companions to Arthurian literature, both of which look quite interesting, so now I want them both.  And King Arthur: Myth-Making and History is another fairly scholarly take on how the idea of Arthur changed over time. 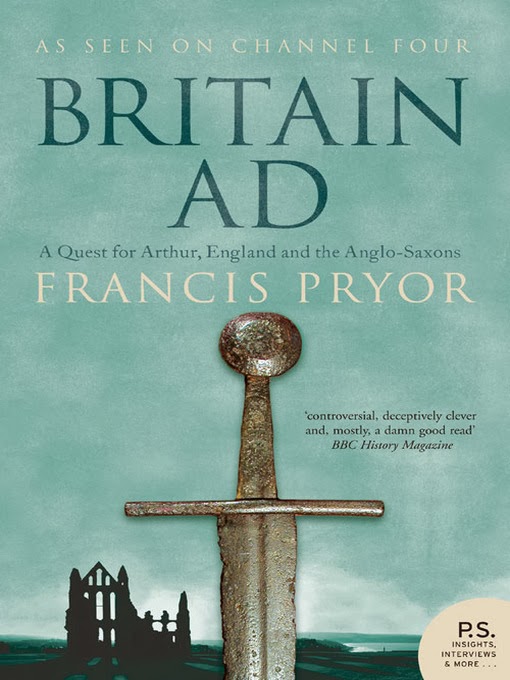 Books looking into the historical roots of the Arthurian legend are easier to find.  Everyone wants to find the real Arthur, it seems!   Britain AD, by Francis Pryor, looks to be an interesting book about the "Dark Ages" in Britain (I don't love the term 'dark ages').  Although the subtitle pushes the King Arthur angle, I get the impression that the book is really about Britain as a whole and is not primarily focused on Arthur.  Still, it looks just fine--although the TV program tie-in makes me a little suspicious.  Last time I read a history book that was linked to a TV program I was not all that impressed.  Alternatively, The Reign of Arthur by Christopher Gidlow looks very similar, but focused on the Arthurian legend.  So pick either one, or a different book altogether.  Geoffrey Ashe's The Discovery of King Arthur is an older text, but a landmark; I read it years ago and found it interesting.

One very famous history book is Leslie Alcock's classic Arthur's Britain.  It's highly regarded and available from Penguin.  It's also about 40 years out-of-date, and a lot has happened since it was published in 1971, so it may not be ideal, but it looks fascinating and well-written, and I am planning to read it this year.  Alcock ran an excavation of Cadbury Castle, so he would certainly know some wonderful stuff!

Jessie L. Weston wrote a famous seminal work on the Holy Grail tradition called From Ritual to Romance.  I read it last year and you can see my thoughts here.  The Dancing Goddesses book I just read tackled many of the same themes, so I've been thinking about it.  Weston is out-of-date these days, but she was hugely influential for most of the 20th century and is very worth reading.