The Decline and Fall of Europe 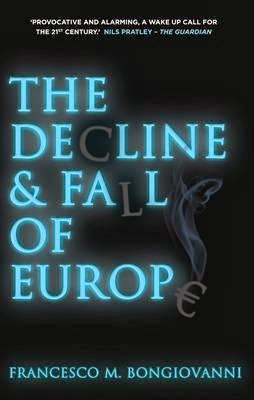 The Decline and Fall of Europe, by Francesco M. Bongiovanni

Bongiovanni is convinced that Europe has got some serious problems, in the forms of over-bloated bureaucracy and regulation in the EU, a single currency that is supposed to work for too many different economies,
far too much governmental debt/taxation/benefits, cultural reluctance to change, and demographic decline.  He dedicates chapters to each of these issues--and more-- and especially concentrates on explaining complex financial situations to the layperson.

Bongiovanni is a believer in the concepts that originally sparked the idea of the European Union:  "[the] unification project launched by eminent and creative thinkers after the Second World War based on the idea that Europeans should find better things to do than to keep slaughtering each other."

...but he believes that Europe has gone off the rails and is headed for trouble. While he would like to see change, and he writes to do what he can to convince Europeans of his case, he has no expectation of success.  In the end, he is expecting Europe to drift into poverty.

What was most interesting to me in this book is that Bongiovanni is himself European and has lived and worked in Asia, but not in America.  Unlike most of the books that I see on the current state of Europe, Bongiovanni is not American and has little concern with the US; when he compares Europe to other areas of the world, he focuses on Asia.  He's not writing from the usual perspective that I see, which is nice for me.