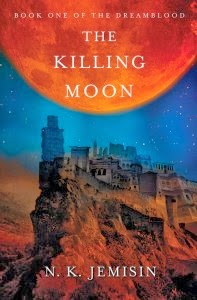 I don't really keep up with the SF/F publishing world, so I missed the arrival of N. K. Jemisin on the scene a few years ago.  Luckily for me, Eva recommended her the other day, so I went looking.  I was going to try to get The Hundred Thousand Kingdoms, but my library only owns The Killing Moon, so I got that.  And it is a pretty fantastic book, everybody, so if you are at all interested in fantasy, I recommend it.

In the holy city of Gujaareh, peace is the law.  Everyone knows their place in society and does not leave it. Priests use magic drawn from dreams to heal most sicknesses and injuries, and there is no crime, because any kind of crime is punished by death.  The Hetawa, servants of Hananja, don't just heal, they also kill--they offer peace to the dying and enforce death upon the corrupt.

Nijiri is a young acolyte training to be a Gatherer; his mentor is Ehiru.  Ehiru has been assigned to Gather Sunandi, an ambassador from the neighboring kingdom of Kisua; she has been judged corrupt.  But Sunandi has learned of a political conspiracy that makes use of the Hetawa and portends devastating war.  Erihu needs to find out the truth and uncover the power behind a series of secret murders...

The story is gripping, and the characters well-drawn.  I really liked the society--partly inspired by ancient Egypt--and the world, which is a moon orbiting a gas giant (as if on Io or Europa), so that the planet dominates their night sky, their culture, and their religion.  Neat ideas, but Jemisin does not spend time showing them off (a mark of skilled SF/F writing).

The ending is distinctly creepy, or was so to me.  I am wondering if Jemisin meant it to be, or if I'm seeing something that she didn't mean to be there, because the summary of the sequel's plot seems to imply otherwise, but I think she meant it to be creepy.  If you've read The Killing Moon, please weigh in with your opinion on this burning question!

This is fantasy for grown-ups, though.  There are themes that in my opinion make the book more for older teens or adults.  I wouldn't give it an R rating, but...PG-16, yes.

I plan to read the sequel for sure, and then see if I can get other Jemisin books.  It looks like a new story is due out soon.