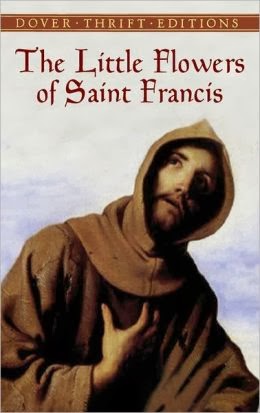 I picked this book up a few years ago; I'm always attracted to medieval texts about saints (or anything else really), but then I don't get around to reading them.  Since I read a biography of Francis earlier this year, I thought I'd read this too.  It took me a while, though; it's written in a semi-Biblical style that makes the going a little slow, and the homilies are a little hard to read patiently.

The first half of the book is lots of short chapters about incidents in St. Francis' life, starting of course with his conversion, and then narrating lots of little stories about him and his followers.  The second half is more of a continuous narrative that tells about events from the time that Francis gained his famous stigmata.  He lived with them for a couple of years before dying, and from then on the story is about his canonization and the lives of two famous disciples, Friars Juniper and Giles.  A last section contains homilies of Friar Giles.

So I am finishing the year knowing a lot more about St. Francis of Assisi than I knew before.

This is my final Mount TBR title for 2013.  That noise you hear is me finishing this challenge by squeaking in at the last minute.  That pretty much does it for my challenges this year; I even read enough essays (if you count that I sometimes read several essays and then put it on one line), though I forgot to blog about a couple of them.
medieval religion