By Jean - December 10, 2013
I thought I had pretty much decided on all my challenges for 2014, and that I was going to be pretty minimal about them (by my standards anyway).  BUT THEN o went and started a Russian Literature Challenge at her new blog.  AND Tom the Amateur Reader has been talking about Turgenev and literary debates in 19th century Russia and it all sounds so fascinating that I have to find out about it.  Not to mention the Eugene Onegin readalong in January that I am so tempted to join, even though my January is now ludicrously stuffed with reading events (I would like to try out the Falen translation instead of the Deutsch I read before, but that will require either a purchase or an ILL).  So here I am, signing up for just one more challenge. 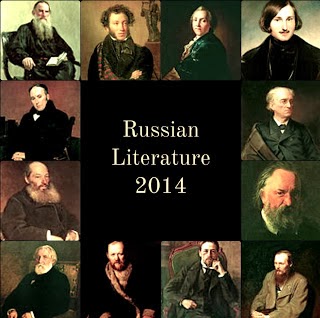 Because this is a classics blog, I would limit it to classic literature. It can be a novel by a Russian author or a novel set in Russia, and how you choose to define "classic" is up to you. And, of course, you can use books from any other challenge you've set yourself. Finally, you can list list your books before you start, or, like me, you can just explore and read whatever comes your way.
There are four levels:

If there's enough interest, I'll put a post up each quarter for people to link any posts may have written.

I have many Russian books on my mental list of Things To Read, but here is a rough list/schedule of books I would like to read for the challenge.  The more I look around, the more tempting books I find, plus there's my tendency to want to do the highest level of any challenge, but for now I will officially sign up for level two (4-6 books) and see how it goes.

But there are so many others, like Chekhov's plays, Tolstoy's short stories, Solzhenitsyn's works (August 1914 is tempting for WWI's 100th anniversary!), and who knows what else!  Plus there are two works of criticism I'd like to read: Nabokov's Lectures on Russian Literature has been on my list for a long time, but I figured I'd better actually read most of the works he speaks about first, and now I've had Isaiah Berlin's Russian Thinkers recommended to me too.  I wouldn't count those for the challenge, but I would sure like to squeeze them in.