A Farewell to Arms Readalong

By Jean - June 09, 2012
So far I've read the first 10 chapters of A Farewell to Arms.  And so far I'm not enthralled, but hey, we can hope.  I didn't really expect to love Hemingway's famous style.   Here are the questions from the War Through the Generations blog:

For this week, we read chapters 1-10.  Here are this week’s questions, feel free to join the discussion.

So far, how do you feel about Hemingway’s writing style? Are you enjoying it?

Not really.  He does make you work by plopping you into the story with no introduction; you just have to figure out where you are, and that's not a bad thing in my opinion (SF generally works best that way).  He likes run-on sentences without commas, which was probably quite new and original back then, but now makes me think of Cormac McCarthy.  Hemingway's words have not really grabbed me.  Everything is too surface or something.  I don't care about Henry or Catherine much at all, though I feel bad for the poor priest.


Rinaldi and Henry seem to have a brotherly relationship.  Do you think that this friendship will survive throughout the novel or will something come between them?  Speculate. 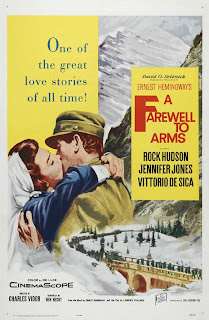 I absolutely thought that they were being set up for a mutual rivalry over Catherine, and it's nice that that didn't happen.  Rinaldi seems to be a remarkably easy-going guy, and Henry is quite hard to get to know.  He seems a blank to me, like he doesn't have feelings.  I think something--the war itself perhaps--will come between the two men.

They never really seem to do anything besides drink and visit brothels and make fun of people--they don't seem real to me, or else they're behind a wall.

What kind of relationship do Lieutenant Henry and Nurse Catherine Barkley seem to have? Are they in love or is it something else?

I wouldn't call it love; I'm not sure they know each other at all anyway.  It seems to me to be one of those relationships that happen because two people are thrown into an environment they don't understand, and they cling to each other.  Catherine seems to be looking for someone she can use to make things up to her dead sweetheart rather than starting something new.  I'm not even sure Henry likes her at this point; she's a girl, so he visits her.  It might become love, but I'm only guessing that because the movie posters say it's a great love story.  Maybe that's only the movie version!