A Farewell to Arms Readalong IV

By Jean - June 30, 2012
The readalong at War Through the Generations is wrapping up, and here are the final discussion questions.  Don't read this if you don't want to know what happens at the end. 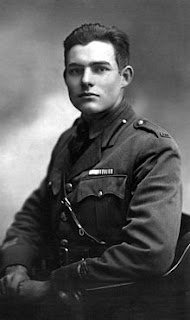 I just assumed that he was speaking of himself only and using a sort of figure of speech.  I noticed it, but didn't think about it too much.

2.  After Henry’s escape into the river, he talks about not having any obligation to the war effort on either side, though he wishes both sides luck.  Do you think he is no longer brave/courageous or is it something else?  Explain.

I think he's had enough and sees that moment of escape as an irrevocable choice to leave the war.  He's in a bind--he's been trying to do his duty and get the cars and equipment where they're supposed to go, but it's a mess, and now he's been picked up and will be shot as a deserter or a spy no matter what he does.  No one is going to listen to his story, and it's either escape or die.  So I think the way he sees it, the war hasn't given him any choice; they threw him out and now he's on his own.  Since they threw him out, he doesn't owe anyone anything.  He got caught up in the stubborn stupidity of WWI military bureaucracy and he didn't have much choice.

3.  In this last section, it seems that some humor comes into play between Henry and Catherine.  Did this impact your feelings about the characters and/or their relationship?

They seemed to develop a more real relationship during this time.  They did some real things.  They're still hiding out from the rest of the world in their Swiss mountain cabin, but that's what the situation is; at no time are they allowed to have a normal real-world life.  I thought Catherine became more practical at this point; for the first time she's concerned about the future and about what will happen, though they mostly still ignore it.  And she resolutely ignores a lot about the impending birth, even saying in the boat that life would be a lot easier if she lost the baby.  No wonder Henry feels little attachment to it.

I thought it was pretty good.  There's not much more to say, unless you want to write a different novel about Henry getting through life and recovering from grief, or not; really I wouldn't be surprised if he goes out and drinks himself to death as quickly as possible.

5.  What did you think of Catherine’s death and Henry’s reaction to losing her?

I figured she would die.  I never could see them settling down into a family, that doesn't strike me as Hemingway's style, but it was pretty depressing.  I don't quite understand how gas worked in this era, so Catherine taking big breaths of it with every contraction kind of freaked me out.  (My own first labor looked very much like this one--a long, exhausting labor followed by a c-section and a huge baby, but since I'm lucky enough to live nearly 100 years later, we survived thanks to the wonders of modern medicine.)  That is a huge baby--5 kilos is about 11 pounds.  Even my kid at over 10 pounds wasn't that big--I have to wonder if Hemingway realized just how giant a baby that is.

Anyway.  Henry loses everything.  It's not until the end that you realize how much he loves her.  I thought she was quite brave about it.  Poor Henry, though, I wonder what will happen to him.

6.  What are your overall impressions of A Farewell to Arms?

It wasn't really my kind of a book.  But I've been glad to have others' thoughts about it in this readalong project, and now I can say I've read some Hemingway.