It has taken me months to work my way through the Decameron.  I did not like it about 89% of the time, which is about how many of the 100 stories are repetitively scurrilous.  But now I have done it, and I never need to do it again! 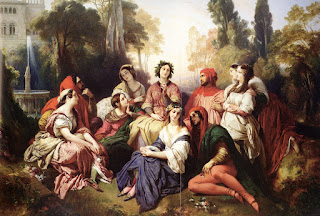 The background for this collection of tales is kind of odd.  The plague is ravaging the city of Florence, so ten Bright Young Things (7 young women and 3 young men) flee the city and lodge in a lovely house in the country, where they sing and dance and generally have a good time while everyone else dies horribly.  Each day, each person must tell a story, and there is generally a theme they have to stick to.  As everyone knows, this book served as a model for Chaucer's Canterbury Tales, in which he uses the same device--but Chaucer spent a lot more time on his characters.  Boccaccio's young beauties are pretty well interchangeable, as far as I can tell, though apparently some critics can tell the difference.

Some of the stories are familiar from other collections; Christine de Pizan used a few (often in a different form) in The City of Ladies, and Chaucer of course lifted some too.  A few are vaguely historical.  Most of them must have been popular anecdotes among the Italians.

I liked the Tenth Day stories best; the theme there was about great and noble deeds, and for once not adultery, so most of them were reasonably good..  But naturally, Boccaccio ends his book with that favorite medieval story, Patient Griselda.  Is there any story that more dramatically shows the difference in mental outlook between medieval people and ourselves?  (On the other hand, maybe only the scholarly men types ever liked that story!  I bet a lot of people rolled their eyes at it.)


I've also been reading The Prince for the past week or so, so I'm all about Italy on the verge of the Renaissance these days.  It's quite an interesting little treatise, but the first few chapters were a bit abstract.  I'd get a couple of paragraphs in and fall asleep!  Now that I'm in the chapters about how to behave, I'm really interested.

I'm way behind on this medieval challenge.  All of the books on my list seem to be incredibly long.  (OK, not The Prince.)  I bet I'll like Piers Plowman better though!  And I did read the first couple of stories in The Golden Legend, hoping that they would be an antidote to Boccaccio, but they were kind of awful in their very own way.  I hope they get better.
medieval TBR challenge