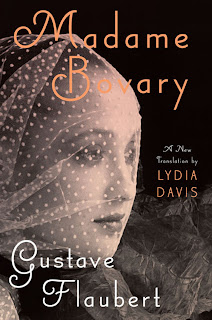 The story starts off with Charles Bovary's early life story; his youth, training as a 'public health officer' (not quite a doctor but close-ish), unenthusiastic marriage to an older woman, and then her death and his remarriage to Emma, a farmer's daughter with a convent training.  Only then does the narrative change to Emma's perspective.  Her husband is unthinkingly happy.  He's got a pretty, pleasant wife and his life is comfortable and he doesn't wish for more, but Emma is discontented.

For one thing, she doesn't love her husband.  The excitement of an engagement gave her the illusion of love, but she neither knows nor cares about this actual, real-life, kind of boring husband she's got.  Emma has read lots of novels, and she thinks that real love would involve poetry in the moonlight, whirlwind passion, and preferably a castle with a dashing highwayman or something.

"Before her marriage, she had believed that what she was experiencing was love; but since the happiness that should have resulted from that love had not come, she thought she must have been mistaken.  And Emma tried to find out just what was meant, in life, by the words bliss, passion, and intoxication, which had seemed so beautiful to her in books."

" ...she was too familiar with the country; she knew the bleating flocks, the milking, the plowing.  Accustomed to the calm aspects of things, she turned, instead, toward the more tumultuous.  She loved the sea only for its storms, and greenery only when it grew up here and there among ruins.  She needed to derive from things a sort of personal gain; and she rejected as useless everything that did not contribute to the immediate gratification of her heart,--being by temperament more sentimental than artistic, in search of emotions and not landscapes."

Then, she also wants notoriety and glamour.  Why can't she go to balls in Paris and meet nobility and ravish everyone with her delightful musical talents?  Without the prospect of an admiring audience, she gives up all her interests and putters around the house with nothing to do.  So she goes into a 'decline,' manipulates her husband into moving to a different town, and gets pregnant--strategies that are sure to solve her problems (or not).

To my mind, Emma lacks gumption.  She's reasonably well-off and there are lots of things she could do, but they aren't glamorous things, so she does nothing and feels cheated.  Which is horribly aggravating.  I want to sympathize with the part about not loving her husband, but she did choose to marry him and she makes it difficult!

The writing is beautiful.  It's very physical; things and people are meticulously described.  I don't think Flaubert is constructing a plot in the same way that we would expect in a Victorian novel, it's more modern in structure, with characters sort of aimlessly wandering around the way people do in real life.  I am loving the writing, and enjoying the book, but Emma herself ...oy.