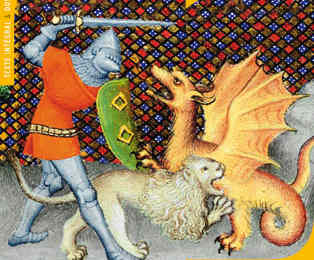 Yvain: the Knight of the Lion, by Chretien de Troyes

Chretien de Troyes was one of the key poets in turning some old legends about a King Arthur who fought the Romans and had a really prophetic wizard into the King Arthur whose stories we know so well.  And he wasn't British.  He was French, and he turned the stories into fashionable French romances.  Chretien invented the character of Lancelot and the whole Lancelot/Guinevere storyline.  Yvain was one of his favorite poems (I gather) and works as a sort of proto-novel in its structure.

Yvain is a knight of great prowess, related to Gawain.  He does great deeds and wins a wonderful prize, but he loses it all through his own fault. Poor Yvain goes through many trials to atone for his thoughtlessness.  Along the way, he saves a lion and earns its loyalty, so he is known as the Knight of the Lion.

I'm always interested in the setting for the Arthurian stories.  Knights and maidens go venturing through a trackless forest, hoping to find adventure or help or whatever it is they're looking for, but it's a fairy-tale sort of forest; you get where you're going through magic or fate.  (You always know that Broceliande is a specially magic forest, by the way.  It's the wormhole technology of medieval France.) No one has a map or any idea where to go.  Roads are chancy. Everyone just wanders around and ends up in the right place.  This world is populated by knights and ladies, hermits and nuns, but remarkably few peasants.   Yvain actually had some townspeople, who said a few things, and that was a bit unusual.

It was quite fun to read an Arthurian story for this medieval project.  This happens to be the only Chretien tale that I didn't read in college, and it was a nice break before I tackle something larger, like The Golden Legend or Piers Plowman--both of those are sitting on my nightstand.

Chretien and I go back a long way, and it's a fun coincidence that I read this story just in time for the anniversary of when my husband and I got engaged, since Chretien was involved a little bit.  In the spring of 1995, I was in my last semester of college and auditing a course in medieval literature taught by my favorite professor.  I was therefore carrying my volume of Arthurian Romances one day when I met up with some other people I knew in hopes of a carpool to an event in the next town.  The car never showed up, but a cute new guy who had just come back from two years in South America asked me about my book--he thought I must be reading French, which would have been impressive if true.  As we gave up on the car and started leaving, the new guy offered to walk me home, but his brother asked why that would be necessary (since it was afternoon and not dark), so I quickly went on my way and they walked in the other direction.  Some time later, the brother figured out why someone might want to walk a girl home!   This small setback didn't do any harm, I guess, since the cute new guy walked me home several times after that, and got me to marry him less than a year later.
classics medieval