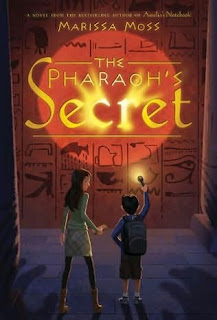 The Pharaoh's Secret, by Marissa Moss

This is a great story for older kids or YA.  I know there are lots and lots of kids' adventures in Egypt (though this one pre-dates Riordan's Kane Chronicles), but this is a worthy read.

Talibah and her brother Adom are visiting Egypt for the first time, even though both their parents are native Egyptians and scholars of Egyptology too.  They had always looked forward to taking the kids to Egypt, but then Talibah's mother died, about 5 years before the story begins.

Talibah keeps running into references to the Pharaoh Hatshepsut, and feels a strong pull to find out more.  Pretty soon she's having weird dreams and meeting people who give her mysterious artifacts--she and her brother have a job to do that is connected with Hatshepsut and the rest of her family.  At the same time, memories of their mother are surfacing; this all has something to do with her, too.  It's all very mysterious, but together Talibah and Adom plan to solve the puzzle and help the spirits of ancient Egyptians who still have opinions about things.

Moss' story combines Indiana-Jones-esque adventures with more realistic elements of dealing with a parent's death, a theme that clearly has a lot of meaning for her (as she explains in the notes).  Another minor point is that the story centers on a Muslim family; it's not brought out and made obvious, but that is part of their character.  So those of you looking for stories featuring strong heroines who aren't WASPs, this one is a good addition to your list.
150+ Challenge 52 books