By Jean - June 05, 2012
Time for the second week of Warbreaker discussion--chapters 13-23.  I'm really enjoying this book a lot, it's fun and complicated and puzzling.  And you can always count on Sanderson for snappy dialogue.  You can also admire the UK cover of the book, which is not great but is slightly less bad than the US version.


What is Vasher up to?  Is he trying to overthrow the government or run a rebellion or what?  I wonder how much influence that sword has on him, even unconsciously.

2) How about the mercenaries themselves? Denth seems to be spectacularly dangerous; more than we may have suspected. Then there is Tonk Fah and the recently introduced Jewels. Are they playing it level with Vivenna, do you think? 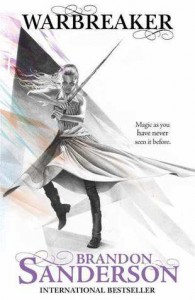 One hopes, but probably not.  I like the mercenaries, but I expect they've got something going on elsewhere too.  The two men remind me of Mr. Croup (Denth) and Mr. Vandemar (Tonk Fah) from Neil Gaiman's Neverwhere, only funny and not so horrifying.  Jewels is a Drab, which is interesting.  The mercenaries claim that losing your Breath isn't that big a deal really, but I think it sort of has to be or what's the point?  I'm more inclined to go with Vivienna's belief that Breath is like a soul.

Speaking of Breath, there are 25 or so gods in the court, plus the Godking who gets two Breaths a week.  That's 27 Breaths a week, right?  At that rate, how does anyone in the city avoid becoming a Drab?  And, that's a dang horrifying religion there.

3) We – and Siri – were let in on (some of) the secrets surrounding the God King as well, and what has been done to him to keep him in check. Or at least; we’ve seen Siri’s thoughts on why it was done. Do you think she was right? What consequences do you perhaps see arising from her teaching the Godking?


I think the Godking had a point when he wrote that he has too much power.  That doesn't mean his priests are good, as he believes; it's obvious they aren't.  And keeping the poor Godking illiterate and unable to speak is barbaric--I think Siri is right that not teaching him to read was a strategy to control him.  Last week I thought he might not be sane, and now I'm a bit surprised that he is after several decades of this treatment.

If he gets loose, it will be a problem.  The Godking does have too much power for any person to wield.  I don't care how benevolent he might want to be--it wouldn't work.  He's going to have to die or something.  Can he die?  Maybe he can do the giving-up thing the other gods can do if they want (which they don't).

4) Blushweaver seems to be working toward some end goal we’re not yet privy to, but we know she is after anyone with Lifeless commands. Any ideas what/who/where her target may be once control of the Lifeless is gained?

Maybe she wants to take over the entire government herself!  If she could get the Godking's Breath...would that work?  Or maybe it will turn out that she's secretly a democrat who doesn't believe in the whole Returned religion.