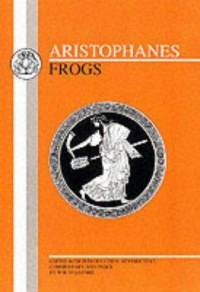 The Frogs, by Aristophanes

This comedy was performed just a few months after the deaths of Euripides and Sophocles, which inspired the plot.  It won first place at the festival, and it even got a unique distinction--it was performed a second time (remember, plays were only performed once), and at the performance Aristophanes was crowned with olive leaves.  A sacred olive leaf wreath was only for citizens who had rendered great service to Athens.  This great honor was not for the parts of the play that moderns will find interesting.  It was for the chorus' long patriotic songs, exhorting Athenians to require nobility in their leaders, just like in the glorious days of old.

The plot of the play seems rather audacious to me, but apparently anything went with the Athenians at this festival.  Dionysus, the very god honored by the plays, is the star of the show and the butt of nearly all the jokes.  Disguised as Heracles, he and his servant Xanthias are looking for a road down to Hades, for all the good poets are dead and he wants to bring Euripides back.   Xanthias is stronger, braver, and more clever than his divine master, and he makes a lot of mischief.  Dionysus crosses the lake Acheron, and here is where the chorus of frogs comes in--they sing and make fun of the god until he finally silences them with a loud toot (which was edited out of my rather polite Loeb edition).  The frogs are never seen more; from now on the chorus is of mystics who chant hymns and exhortations in Hades.

Dionysus and Xanthias now meet the citizens of Hades.  Most of them want to beat Heracles up, so the cowardly god makes his servant change clothes with him a few times.  They're even tortured for a little while.  Finally they find the dead Euripides along with Aeschylus--the two poets are bitter enemies, for Euripides is challenging Aeschylus' right to the seat of honor at Hades' dinner table.  Dionysus offers to act as mediator, and the playwrights criticize and make fun of each others' plays.  Some of it is pretty obscure because it depends on understanding the meter of Ancient Greek poetry, but some of it is funny.  Dionysus can't decide, so he has them speak sample lines of poetry into scales.  Aeschylus comes up with lines about heavier subjects like rivers, Death, and a couple of dead charioteers, so he wins that round, but Dionysus still waffles and says he'll pick the poet who can give the best advice to Athens.  Euripides sounds good but doesn't mean much, while Aeschylus comes up with solid advice, so Hades gives permission for Aeschylus to return to life on earth so he can give good advice to needy Athens.  Aeschylus delivers a parting shot on his way out, ordering that Sophocles be given the seat of honor rather than his enemy Euripides.

What a weird play.  Interesting, but weird.  That's it for Aristophanes for the time being; I'm thinking of reading either Euripides or some poetry next.
Greek classics