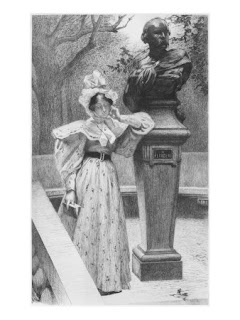 I've finished Part II of Madame Bovary.  Not much more to go, really.  The writing is just wonderful (I think I said that before)--elegant and realistic and just a bit satiric.

Emma just keeps making things worse.  She has a baby, but refuses to engage with her child, first because she didn't get to have all the fancy baby accessories she would have liked, and second because she had set her heart upon having a boy.  As a result, she leaves her baby girl with a nurse, which was normal at that time, but she visits only once, and seems not to care about the welfare of her child at all.  When little Berthe returns home, Emma pays almost no attention to her.

For a while Emma cultivates virtuous housekeeping, and very much enjoys watching herself do it, but she is putting on a show more than anything else.  Soon enough a neighbor moves in; he is a man of the world and can easily see that Emma longs for romance.  Completely cold-bloodedly, he decides to seduce her.  It's tragic to watch Emma delude herself that she's finally experiencing true romance, as we see that Rudolphe knows just how to play her.


"He treated her casually.  He made her into something pliant and corrupt.  Hers was a sort of idiot attachment filled with admiration for him; sensual delights for her, a bliss that numbed her; and her soul was sinking into this intoxication and drowning in it, shriveled like the Duke of Clarance in his butt of malmsey."

"...his pleasures, like children in a schoolyard, had so trampled his heart that nothing green now grew there, and whatever passed that way, more heedless than the children, left behind not even its name, as they did, carved on the wall."

Flaubert really likes to put ridiculous touches into scenes of high drama, which I enjoy a lot.  Emma herself would just hate that, since she has no sense of humor.  For example, Rodolphe's speech when he first starts to seduce Emma is all romantic declarations--which are constantly interrupted by the award ceremony at the agricultural fair, so that we hear about rams and pigs even as Emma is in transports.  Flaubert constantly reminds us of the fact that Emma is always trying to forget; real life is full of mundane and unexalted details that have to be lived with.  You can't really live on nothing but romance.  If you try, you'll end up--at best--feeling silly, like Anne Shirley trying to be the Lady of Shalott.

Again and again, Emma sets up expectations of how things ought to be.  When life fails to live up to her imaginings, she gives in to petulance and resentment.  And Rudolphe uses it to victimize her.  Things are not going to end well.

Part II begins with a description of the country around the Bovarys' new village.  It sounds lovely: "the countryside resembles a great mantle, unfolded, its green velvet collar edged with silver braid."  But the concluding paragraph tells of a different reality beneath the first impression: "Here you are on the borders of Normandy, Picardy, and Ile-de-France, a mongrel region where the language is without expressive emphasis, just as the landscape is without character.  It is here that they make the worst Neufchatel cheeses in the whole district, while farming is costly, because a good deal of manure is needed to enrich this crumbly soil full of sand and stones."  It's easy to see that Flaubert is describing more than the countryside here; he's telling us about Emma's character.