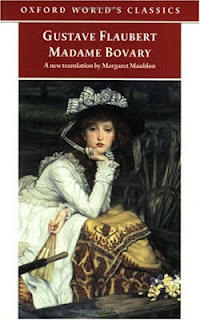 It's the final post on Madame Bovary, and there are spoilers, so don't keep reading if you haven't read it yet!

This last part was very sad.  Emma's immaturity and greed just catches up with her on all fronts, but I was surprised that it was her debt that finished her off, not her adultery (though they have the same root cause).

Emma reminds me of several literary heroines who have similar flaws, but who conquer them--frequently in moral novels for girls.  Anne Shirley wants romance, but her sense of humor, moral training, and good sense eventually teach her that the real boy next door is better than a fictional brooding hero.  Meg and Amy March both desire luxury, but each receives lessons about the vanity of wanting more than you can have.  Oh, let's not forget Marianne Dashwood, who nearly loses her respectability and her life to her romantic notions, and learns to value solid worth!  (None of these people stop being romantic; they just learn to control themselves, as we all must.)  Emma Bovary never tries to conquer her flaws, and she's able to dodge all consequences until the final smash overwhelms her.  She's what happens to a completely uncontrolled extravagant/romantic personality.  And here I thought realistic novels weren't supposed to be moral cautionary tales...

Some bits caught my eye as illuminating Emma's character:


"It's quite improper, you know."
"In what way?" replied the clerk.  "They do it in Paris!"
And that remark, like an irresistible argument, decided her.

Not that she needed much convincing anyway!  But Emma wants to be doing the fashionable, popular thing, and whatever people are doing in Paris, she'll do it too.  (At this point her mother would demand, "And if people in Paris were jumping off cliffs, would you do that too?")


Emma was becoming a little confused by his calculations, and she felt a ringing in her ears as if gold coins were bursting out of their sacks and clinking on the floor all around her...A vista of attainable fantasies then opened out before Emma...

Poor silly Emma, discovering how easy it is to borrow money is her downfall.  She really thinks that she can just keep putting off the day of payment, and have all those little luxuries she wants.   This bit reminded me rather strongly of our recent mortgage bubble!  It's hard to learn that you should only buy what you can afford to pay for--it's all too easy to get into debt just trying to feed your family!


It didn't matter.  She was not happy and never had been.  Why was life so inadequate, why did the things she depended on turn immediately to dust?...Yet if somewhere there existed a strong, handsome being, with a valorous nature, at once exalted and refined, with the heart of a poet in the shape of an angel, a lyre with strings of brass, sounding elegiac epithalamiums to the heavens, they why mightn't she, by chance, find him?  Oh, what an impossibility!  Nothing, anyway, was worth looking for; everything was a lie.  Every smile hid a yawn of boredom, every joy a malediction, every pleasure its own disgust, and the sweetest kisses left on your lips no more than a vain longing for a more sublime pleasure.

I think that just about sums it up; Emma is fundamentally discontented and will never be satisfied.

Unfortunately her discontent ruins everyone else too.  I did hope that at least little Berthe would go on to a better life eventually, but no!

It's an excellent book, so well-written--and so depressing.  I think I need to read a nice cheerful book now.