Mystery of a Hansom Cab 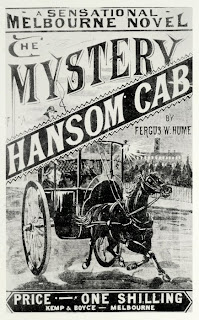 The Mystery of a Hansom Cab, by Fergus Hume

The other night I was wondering what to read, since nothing looked right, and then I saw Mystery of a Hansom Cab sitting on the shelf.  It's on my list, it's Victorian, and it's a mystery--perfect!  It turned out to be an even better choice the next morning, when I spent a couple of hours sitting around a prompt care clinic, whee.

This was apparently the best-selling mystery of the 19th century, beating out Sherlock Holmes--and it isn't a British book.  It's an Australian story, set in Melbourne, which must have made it pleasantly familiar for Australians and nicely exotic for everyone else.  There are many descriptive passages that give you a good feeling for Victorian Melbourne; to me, it came off as if someone had plunked some Victorian Londoners down in California a generation after the Gold Rush.  The weather and setting is very familiar, since much of Australia is similar in climate to my own California, but people are wearing evening dress and practicing British manners.  Australia is still very much a British colony in this story, which was published in 1889.

The mystery seems obvious at first.  Late one night, a gentleman in evening dress is put into a hansom cab, falling-down drunk.  His acquaintance goes with him for most of the way, and then leaves the cab to walk home.  When the cab driver calls the passenger, he is dead--murdered.  It doesn't take long to track down the fellow who must have done it--but did he?  It all gets very complicated, with secrets from the past, true lovers, blackmail, a gin-soaked crone, and a couple of bouts of brain fever just to make things interesting.  Everyone is very earnest, and there is quite a lot about woman's purity (and her natural love for shopping and talking).

A nice mystery to read if you're looking for one of the original classics.  Easily available for free as an ebook, but I have an old Dover facsimile.


This is for the Victorian Celebration and the Classic Bribe!
classics Victorian