We're back in Barsetshire!  Framley Parsonage is the fourth novel in the series and was published serially in Cornhill Magazine (a new project belonging to Thackeray)--with illustrations by John Everett Millais to boot.  It was Trollope's first serial novel, and it was an enormous hit.  Trollope planned the novel to appeal to popular taste for domestic middle-class novels that were as pastorally English as they could possibly be; there is relatively little plot, but lots of wonderful characters, and a little something for everyone. 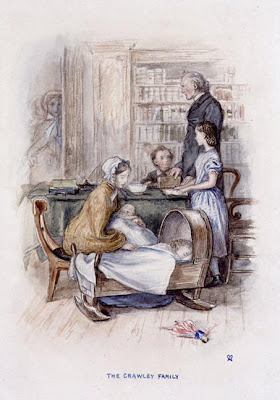 We have two protagonists, a brother and a sister.  Mark Robarts is a young clergyman who has been a little too fortunate in his career for his own good.  He had a prosperous living (900 pounds a year!) and a lovely wife handed to him on a platter, and life is nice.  But his best friend is Lord Framley, and Mark wants to get ahead in the world, so he starts hobnobbing with local politicians--the MP and even the Duke of Omnium, who both have bad reputations.  Mark is too young and too naive to know what he's getting into, nor can he find the backbone to get out--and the MP talks him into co-signing a loan for 400 pounds.  Before he can blink, Mark is in debt for over 900 pounds and hasn't a clue how he's going to extricate himself from the mess.

Lucy Robarts is Mark's younger sister and lives with his family.  Like Trollope's last heroine Mary Thorne, Lucy is not interested in putting herself forward, nor is she a beauty.  She is a nice young woman with a much stronger character than anyone gives her credit for.  Lucy and Lord Lufton become friends, and that's all it is until Lufton's benevolent but domineering mother warns Lucy off--she has plans for her son that do not include the insignificant poor sister of her own clergyman.  This, naturally, triggers both Lucy and Lufton's realizations that they love each other, but Lucy is not about to get a reputation as a gold-digger.  The young lovers will just have to get over it, that's all--but easier said than done.

Of course a Barsetshire novel must include a huge cast of characters, each with their own stories and parts to play.  That's what makes it so fun.  And there's politics and church politics and farming and money and debt and balls and typhus and children and rivalries over daughters and all sorts of bits of English life--plenty to enjoy.

I think my favorite part was Lucy's stint of nursing Mrs. Crawley through her illness (the illustration here is Millais' portrait of the Crawleys, a poverty-stricken clergyman's family).  I love how she just walks in and takes over.

It's not the sort of novel that people like so much now; it's too diffuse and long and full of Victorian details about church politics that no one understands now (prebendary?  archdeacon?).  It's certainly a nice relaxing book though, kind of the 1860 equivalent of a beach read.


PS While looking for images, I happened upon a blog post comparing Framley Parsonage to the classic Bollywood movie Dilwale Dulhania Le Jayenge.  How can I not love that?  This may be my new favorite blog.