War Through the Generations is hosting a readalong of Hemingway's A Farewell to Arms.  This week we read chapters 21-30. 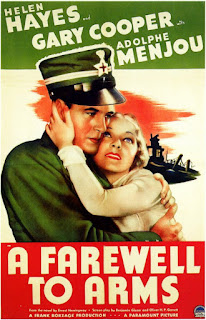 1.  “The coward dies a thousand deaths, the brave but one” is a statement made by Henry, and he and Catherine enter into a discourse about bravery.  Do you think either character is brave and do you think Catherine is right when she says the brave die more deaths but just don’t talk about it? Explain.

I have to say, at this point I think Henry's pretty stoic.  He's put up with months of severe pain with barely a whimper (albeit with quite a lot of brandy).  He's not interested in running into battle, but he's reasonably cool under pressure and I think he's brave.

Catherine, at least, is holding herself together at the prospect of having a baby out of wedlock in a foreign country in the middle of a war with no resources and nowhere to go.  I still think Catherine is a ninny, but I'll give her points for courage.  I think she's probably right about brave people just not talking about their fears, but how would I know? :)

2. What do you think about Henry’s reaction to Catherine’s pregnancy announcement?
He doesn't get much of a chance to say much, does he?  I think he's a decent guy for not freaking out, though.  It always aggravates me when people are surprised that biology works, and you would think she and he would have expected this, but at least he didn't freak out.  I was complaining to myself earlier in the book that no one in novels ever gets pregnant, so at least Hemingway allowed nature to happen.

Other than that, I have no idea how Henry reacted, since you never get any kind of window into his thoughts.

3.  Why do you think Catherine suddenly feels like a whore rather than Henry’s wife?  What does that say about her character?

She has never thought that much about what she's doing, or about what her society would think of her.  She says she feels married, but she also knows that she isn't--she and Henry don't have a home together, and I think going to a hotel for a tryst is just too much reminder of that.  If Henry gets killed, she won't be getting a widow's pension; she'll just be stuck with a baby and no way to support herself.  It's hard to imagine them actually getting married and settling down after the war with a family.


4.  When Henry is debating the feeling of defeat with the priest and the possible end to the war, Henry says, “‘They were beaten to start with.  They were beaten when they took them from their farms and put them in the army.  That is why the peasant has wisdom, because he is defeated from the start.’”  How is this statement true or not true?

I suppose he's saying that the peasants didn't want to have a war in the first place, and they know that fighting is not going to improve things any for them or their families.

5. What do you think about the way Hemingway describes the front?

It's very confusing, and I expect that's realistic!  This was one of the parts I liked best.  They could only see a little of what was happening.

6. What do you think about the shift in the story from Henry’s therapy and his relationship with Catherine to the front and the retreat?

I liked it much better.  I got very tired of Catherine.  I don't like thinking so little of her, but she drives me crazy, never thinking about anything but subsuming herself in Henry.  I don't think much of Henry either, but at least something else is happening!

I agree that the confusion, especially about the way to retreat, makes the war seem very real.

I like the confusion that is in this section when they get to the front and the battles and retreat happen; i find that part very realistic....even the shooting of Aymo by his own people...friendly fire is definitely something that happens in war.

I was getting sick of Catherine myself so getting into the war was a welcome change of pace. I wish we knew more about the characters because I could forgive Catherine a bit if the only reason she doesn't seem to have a life outside of Henry is because it's easier than facing her loss.