Warning to the West 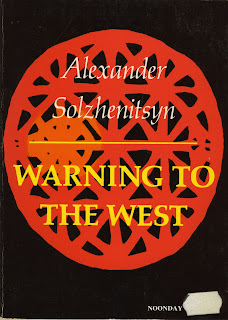 Warning to the West, by Aleksandr Solzhenitsyn

I just recently got the Solzhenitsyn Reader, and I'd been hoping that these speeches were included in that book, but they weren't.  In fact it kind of cheats in my opinion, in that large swathes of the book are excerpts from The Gulag Archipelago and other gigantic works, and I'd been hoping for lots of essays and speeches collected in one place.  I should really know better than to get readers--my medieval literature professor used to dismiss them as collections of "gobbets" and I've never found her wrong about it.  Anyway I got Warning to the West through ILL, on the theory that I can't start the whole reader right now anyway.

This book consists of the text of 5 speeches given to the Americans and to the British in 1975 and 1976.  Solzhenitsyn tries (and tries, and tries) to warn his listeners that while the leadership of the USSR might be saying nice things about detente, in fact they are as violent and oppressive as ever, and happy to take advantage of naive and over-trusting Westerners who really don't want to know anyway.

He's got a lot to say, and much of it is not very comfortable reading.  It's insightful and depressingly relevant nearly 40 years later, though.
Posted by Jean at 5:18 PM

I'm glad to hear about the reader--I was considering buying that.

How do you find AS' warnings relevant now, after the fall of the communist system? Just curious.

Not so much about communism, because yeah, there's no more USSR, but about the western countries. He talks a lot about the West's willingness to ignore awful oppression as long as we're getting ours. And a lot of other stuff.

Oh, yes, couldn't agree more. I need to read these.

I should clarify that out of 600 pages in the reader, 200 are given over to chunks from Gulag Archipelago, Cancer Ward, and First Circle. The other two-thirds of it looks to be a great variety of stories, speeches, essays, and prose poems--so I am looking forward to it, just disappointed that fully one-third is from books that are easily available.

Warning to the West does mostly consist of thoughts about the West--our problems and issues that we won't face. Those haven't gone away, though the USSR has.