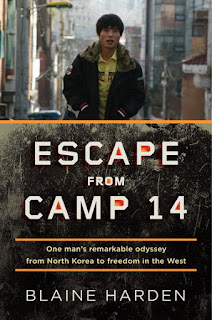 Escape from Camp 14, by Blaine Harden

Shin Dong-Hyuk is the only known person who was born in a North Korean prison camp and escaped.  Only a few people have escaped at all, but the rest have known something about the world outside the camps.  Shin knew virtually nothing, not even the usual North Korean propaganda, and he had never been outside his prison.

(I'm not sure why the author calls him Shin all the time, since that's his family name.)

North Korea, and its prison camps, are not something that we talk about much.  For one thing, we know very little, though that is now changing as the border with China has become more porous and there are people who go in and record news on tiny memory sticks.  Still, though, we don't know much, and we know less about prison camps.

We do know that the prison camp system is large, and in it people are fed a starvation diet and slowly worked to death.  Kim Il-Sung not only established gulags, he not only imprisoned entire families, he also established a doctrine that anyone who 'betrayed' North Korea (say, by joining the South during the war) had tainted blood which could not be purified until after the third generation.  Shin's oldest uncle had joined the South Korean army in the war, and for that all his siblings were imprisoned, and any children and grandchildren they had would live their lives in the camps, laboring to expiate the sins in their blood.

Harden chronicles Shin's memories of life in the camp, his eventual escape, and his efforts to adjust to life in the normal world, which is a very difficult process for North Koreans.  Shin differed from most others in that he didn't need to be 'de-programmed' from North Korean propaganda and pseudo-history, but he had even more paranoia and trauma to get over, and some really awful things to face.

Shin's emotional development is a strange and sad story.  He never knew anything about kindness or love--only hunger and competition for food.  What is surprising is that he manages to develop some feelings later on; they weren't totally obliterated by his brutal environment.  Still, his main ideas of happiness revolve around eating meat every day.

A very disturbing and upsetting book, because it's all perfectly true and ongoing.  But we should all know about this.