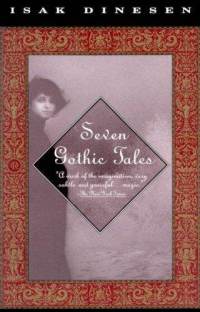 I know her real name was Karen Blixen, but I just always think of her as Isak Dinesen.  So that's what we're going with.

In college I read a whole lot of Dinesen--nearly everything, I think.  I still have all her books on my shelf.  I thought it would be neat to re-read some of them for the Classics Club, to see how I like them now.  Seven Gothic Tales was Dinesen's first published book, so I started with that.

Gothic in this case does not mean that there will be frowning Italian castles, dark passages, ominous priests, or ghosts.  (Well, there's one ghost.)  But here, Gothic means more elaborate, mysterious, Germanic-style-Romantic.  Considering that Dinesen was writing in the 1930s and 40s, she had a deliberately old-fashioned, baroque style to suit her stories that were set in the 19th century or before.  She actually wrote the stories in English and then translated them into her native Danish.

The stories are layered, usually with several frames each.  Characters reminisce and tell stories inside their own story, so that each tale contains several small tales which may be mysteriously connected.  They are not very easy to describe!

Dinesen had an unusual outlook--at least, unusual to me.  She loved all this layered, mysterious atmosphere; nothing in her stories is quite straightforward and never unveiled, to be shown as it is.  She believed in veiling and masquerades.  Nor had she much use for equality or feminism or that sort of thing.  Aristocracy and pride of birth, the mysteries and power of womanhood, that was much more her style.  Here's a small sample, a speech from a character:

This world of ours is like the children's game of bread and cheese; there is always something underneath--truth, deceit; truth, deceit!  When the Caliph masqueraded as one of his own poor subjects, all his hidden splendor could not have saved the jest from being in pretty poor taste, had he not had beneath it a fraternal heart for his poor people.  Likewise, when our Lord id, for some thirty years, masquerade as a son of man, there would have been no really good sense in the thing had he not had, after all, a humane heart, and even, Madame, a sympathy with lovers of good wine.  The witty woman, Madame, chooses for her carnival costume one which ingeniously reveals something in her spirit or heart which the conventions of her everyday life conceal; and when she puts on the hideous long-nosed Venetian mask, she tells us, not only that she has a classic nose behind it, but that she has much more, and may well be adored for things other than her mere beauty.  So speaketh the Arbiter of the masquerade: 'By thy mask I shall know thee.'

They're great stories and very different from most 1930s literature, so give them a try sometime.