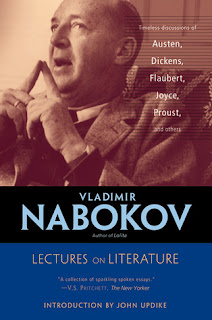 Lectures on Literature, by Vladimir Nabokov


In 1940, before launching on my academic career in America, I fortunately took the trouble of writing one hundred lectures--about 2,000 pages--on Russian literature, and later another hundred lectures on great novelists from Jane Austen to James Joyce.  This kept me happy at Wellesley and Cornell for twenty academic years.

And here they are!  I read the first volume, which is the one not about Russian literature; unfortunately my library doesn't have the second volume, so I will have to get it from somewhere or other.  These are lectures on Austen, Dickens, Flaubert, Stevenson, Proust, Kafka, and Joyce.  Very often they've been sort of reconstituted from notes, and my volume includes reproductions of quite a few pages of those notes--drawings and diagrams as well as writing.  This is a nice addition, but it also makes the volume even heavier and more cumbersome than it already was, so I'm not sure how worthwhile it was.

This is great stuff.  I really enjoyed it a lot, even (mostly) the large section on Proust, which I haven't actually read.  He is assuming, of course, that his listeners have read the books, so it was quite lucky timing for me--I just read 3 of the featured books this year and know most of the others (OK, not Proust or Joyce).  If you're the sort who likes reading lectures about literature, this is a necessary volume.

It is a bit stunning that Nabokov comes right out and says that he doesn't like women novelists: "I dislike Jane, and am prejudiced, in fact, against all women writers. They are all in another class. Could never see anything in Pride and Prejudice…".  The friend he was writing to recommended Mansfield Park, and apparently that was the only Austen book he could stand.

As far as Nabokov was concerned, there is only one reason to read literature:


I have tried to make of you good readers who read books not for the infantile purpose of identifying oneself with the characters, and not for the adolescent purpose of learning to live, and not for the academic purpose of indulging in generalizations. I have tried to teach you to read books for the sake of their form, their visions, their art. I have tried to teach you to feel a shiver of artistic satisfaction, to share not the emotions of the people in the book but the emotions of its author — the joys and difficulties of creation. We did not talk around books, about books; we went to the center of this or that masterpiece, to the live heart of the matter.