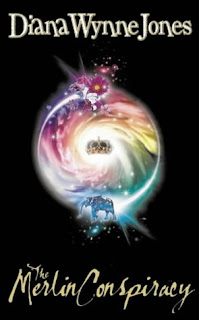 We have two narrators: Roddy, who lives on the Isles of Blest and travels with the King's Progress (and is a teenage girl), and Nick, who lives in our world's England and wants to learn magic.  Somehow he winds up on the dark paths between worlds.  His and Roddy's stories make a helix pattern, twining around each other ever more closely.

Blest is a fulcrum of magic for the multiverse, so it's very important that its King takes good care of the land and makes sure nothing goes wrong with the balance of magic.  His chief advisors and magicians, though, intend to make things go very wrong indeed, and Roddy, with her friend Grundo, are the only ones who realize.  Events really do rest on a fulcrum of one person, so that tiny actions have enormous consequences.

Like so many DWJ books, the plot is so complicated and well-done that it's very hard to summarize well.  It's just really good, so don't miss it.
SF/fantasy YA lit