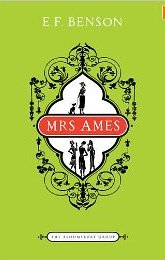 E. F. Benson is most famous for his Mapp & Lucia series, which I have not yet read.  But since I am always attracted by books in the Bloomsbury Group series, I went looking for Mrs. Ames, which is an earlier work from 1912--a satire of ultra-respectable English life from before anyone thought about a war.

Life in Riseborough village is very tightly constrained, and Mrs. Ames is the queen bee, "sceptre firmly grasped in her podgy little hand."  Nearly everyone is middle-aged and comfortably living in a rut of gossip, social engagements, clubs, and minor hobbies.  Mrs. Ames realizes that her husband's eye is straying just a little bit to her cousin Mrs. Evans, and she starts to make some changes.  Before long she is bursting out all over with changes.

I really enjoyed the book, and it has some great scenes and characters.  I particularly love Harry, Mrs. Ames son at Cambridge, who has a secret club (the Omar Khayyam), writes poetry, and is generally pretentious.  One of the great scenes of the book is a fancy-dress party given by Mrs. Evans, who is going to be Cleopatra and have a Mark Antony, but more than one Cleopatra shows up to the party.  And then there is the Suffragette protest!

I did, however, find both Mrs. Ames and Mrs. Evans to be improbably flat.  Mrs. Evans is described as always having been very placid and unemotional, to the point that she has never even felt particularly alive.  And Mrs. Ames is so bound around with convention and respectability that she has never really been a person.  Neither of them ever have much in the way of thoughts or ideas (to be fair, the men have even less).  I just find it hard to believe that any real person could be so un-alive, so lacking in personality, as that.

Still, a fun read if you're looking for an English comedy of manners.
comedy