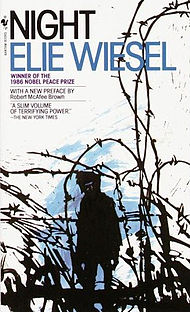 In order to round out my week of memoirs about war and oppression and misery, I read Elie Wiesel's Night--probably the second most famous Holocaust memoir there is.  It's been on my TBR pile for years and I've always rather avoided it.

Wiesel was born in the Transylvania area of Romania.  I was quite surprised to find that his town was largely untouched by the war for years; it wasn't until 1944 that the Jewish population was evacuated by German soldiers.  It was at this point that Wiesel, who was 15, and the rest of his community was taken off to Auschwitz.  They had never heard of it.

Wiesel and his father were assigned to a work team at Buna camp, and they managed to stick together for a long time.  As Germany's defeat loomed, the camps were evacuated and inmates taken further into Germany, and the two ended in Buchenwald.  Wiesel's father died there, only a couple of months before the camp was liberated in April 1945.

I don't know that I have much original to say about it, so I'll stop there.  This image is the copy I read; there is now a newer edition with a new preface, translated by Wiesel's wife, but that is not the copy I have.
Classics Club history TBR challenge