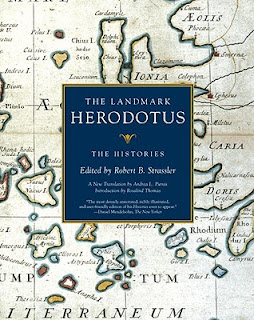 Herodotus and I are back together again and I've read Book V of the Histories.  It was nice to get back into my giant book.

We start off with a description of the Thracian people, who are numerous enough to conquer everyone else if they would just get their act together (he says), but they are too divided up.  There's a really terrible story about the Paeonians and how they were conquered and dragged off to the Persian empire.  Then a couple of very famous stories: one about a Macedonian prince who kills all the Persian envoys (probably not true, since there were no reprisals) and about how the Greeks got their writing system from the Phoenicians, which is apparently quite accurate.

After that there is quite a lot about Sparta and its kings, and Athens and its tyrants, and both of their wars.  It was really quite confusing and I could have used a diagram.  I think Herodotus expects his readers to know a good deal about these people already, as of course they would have done back in his day.  And it's really pretty pathetic how often I managed to forget just who Kleisthenes was, so it's partly my own fault.

Hey!  Look, I found this awesome comic strip about Herodotus and Thucydides.  I love "Hark, a Vagrant!"  --it's hilarious and if you're a history/literature nerd you should go read it right now.  Warning: it will take up the rest of your day, and also there are some swear words.

Onward to Book VI!  Though really I'm not getting much read right now; I've been making candy.  I should go make a batch right now.  A giant rainstorm has arrived here though, so I might not be able to do much chocolate dipping for the next couple of days; wet weather makes it go wrong.
Greek classics