Idle Thoughts of an Idle Fellow 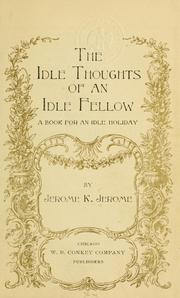 Idle Thoughts of an Idle Fellow, by Jerome K. Jerome

Like every right-thinking literature devotee, I've read and enjoyed Three Men in a Boat.  I hadn't known that Jerome K. Jerome had written so many other things, but now I've downloaded several of them onto my tablet.  Idle Thoughts of an Idle Fellow has chapters that are short essays on this and that: "On the Weather," "On Cats and Dogs," On Memories," that sort of thing.  It's pretty good for bedside reading.

I expected the essays to be funny, and they very often are.  I did not expect to find out how sentimental Jerome could be!  This book consists of at least 60% slush.

Here is a bit I thought was pretty funny, from a chapter about the woes of shyness:


Conceit, indeed, is the quickest cure for it [shyness]. When it once begins to dawn upon you that you are a good deal cleverer than any one else in this world, bashfulness becomes shocked and leaves you. When you can look round a roomful of people and think that each one is a mere child in intellect compared with yourself you feel no more shy of them than you would of a select company of magpies or orang-outangs.

But really there was quite a bit more of this kind of thing.  Here Jerome is talking to his old embroidered firescreen:

Your brilliant colors are fast fading now, and the envious moths have gnawed your silken threads. You are withering away like the dead hands that wove you. Do you ever think of those dead hands? You seem so grave and thoughtful sometimes that I almost think you do. Come, you and I and the deep-glowing embers, let us talk together. Tell me in your silent language what you remember of those young days, when you lay on my little mother's lap and her girlish fingers played with your rainbow tresses. Was there never a lad near sometimes--never a lad who would seize one of those little hands to smother it with kisses, and who would persist in holding it, thereby sadly interfering with the progress of your making? Was not your frail existence often put in jeopardy by this same clumsy, headstrong lad, who would toss you disrespectfully aside that he--not satisfied with one--might hold both hands and gaze up into the loved eyes? I can see that lad now through the haze of the flickering twilight. He is an eager bright-eyed boy, with pinching, dandy shoes and tight-fitting smalls, snowy shirt frill and stock, and--oh! such curly hair.

By the way, did you know that the K. stands for Klapka?  I was struck by the name and looked it up.  His middle name was originally Clapp, but it was changed to Klapka after the Hungarian general György Klapka, who fought for Hungarian independence.  I can't figure out if it was his father or Jerome himself who changed it, but his dad did have a penchant for changing names.  He was originally Jerome Clapp, but changed it to Jerome Clapp Jerome and named his son the same.