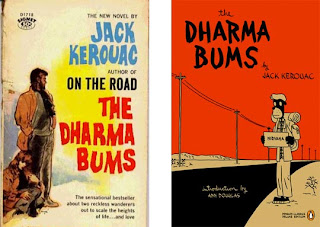 The Dharma Bums, by Jack Kerouac

I always think I won't like Jack Kerouac,* but then when I actually read one of his books, I do like it.  At least, that's what happened with On the Road and Dharma Bums.  Still, my ignorance on all things Kerouac is pretty comprehensive, and I had never heard of this book at all until very recently.  I was rather delighted by it, though, because (here I go again) there is a beatnik coffee shop in one of my favorite books called The Dharma Buns, and I had never gotten the joke before.

Dharma Bums is one of Kerouac's autobiographical "road novels" and comes from a time when he and his friends were very into Buddhism.  Kerouac's character, Ray Smith, hops freight trains and hitchhikes, traveling around or living with friends for a while.  He spends a lot of time with Japhy, based on Kerouac's friend Gary Snyder, and they are Dharma Bums together.  Their city life--consisting of wild parties with other poets and worrisome amounts of wine--contrasts with their time out in nature, hiking, mountain-climbing, and meditating.  Finally Ray spends a summer working as a lookout in the Cascades Mountains.  Throughout, Ray mediates, prays, and ponders Buddhism (though a somewhat garbled version) and some Catholicism as well.

I liked it more than I thought I would.  I'm not usually much on beatniks, but Jack Kerouac I can pretty much live with.  Of course, as you might expect, women only exist in the background, largely in order to be pretty or to cook something.  So that's irritating.  Funny, everyone screams about C. S. Lewis being horribly sexist and how awful that is, but almost no one hates Jack Kerouac on that account.  I guess he's too cool for that.


*Here's a list of things I mostly don't read: American literature.  Modern literature, especially modernist lit.  Hip things about cool people.  Since Kerouac is all of those, he's just not one of the authors I seek out.  I did like On the Road though--although probably not for the same reasons that everyone else in college liked it.
Classics Club