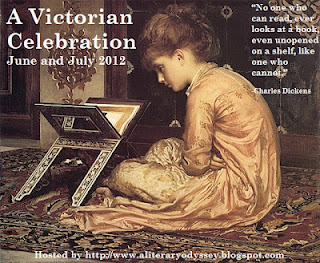 July is about over, and that means the end of Allie's Victorian Celebration.  It's been quite an event, with giveaways and quizzes and all sorts of blogging fun.  So, thanks, everybody!

Here's what I read:

Framley Parsonage, by Anthony Trollope.  Quite an enjoyable read, and apparently one of Trollope's big hits.  It's the fourth Chronicle of Barsetshire (Allie says that Penguin is publishing all 6 in its pretty new English Classics series.  That might be hard to resist).

Mystery of a Hansom Cab, by Fergus Hume.  One of the great early mysteries, set in Melbourne.

Madame Bovary, by Gustave Flaubert.  I got to participate in a readalong for this beautifully-written novel.  It was great stuff!

Little Women, by Louisa May Alcott.  This was also a July selection for the Feminist Classics blog.  It was nice to revisit the March girls.

Bleak House, by Charles Dickens.  I've never read as much Dickens as I ought to, and now I'm starting to have a better appreciation for him.

The Leavenworth Case, by Anna Katherina Green.  Another classic genre-shaping mystery!  This one is American.

A couple of small pieces by William Morris--one influential essay, one strange poem.

The Communist Manifesto, by Marx and Engels--hugely important and eventually world-changing, but awfully difficult to understand for a modern.

The Log Cabin Lady--an anonymous memoir focused on the difficulties of a sudden transition from frontier life to high society.  Very touching, and I mean that in a nice way.


I read more titles than I expected to, but not all of the titles that I actually intended to read.  Quo Vadis had to go back to the library before I got very far into it, and The Last of the Mohicans is still sitting there on my TBR pile.  But it was fun to read a couple of mysteries.  I'm especially glad to have been able to read Madame Bovary and Bleak House!
Victorian