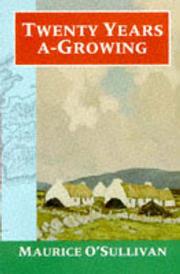 I've read several memoirs of growing up in Ireland, but I've never read one quite like Maurice O'Sullivan's memoir of his youth.  O'Sullivan, born in 1904, was part of just about the last generation to grow up on Great Blasket Island off the west coast of Ireland.  They lived a kind of life that was little changed from that of centuries before, and earned a living through fishing.  But as the fishing got less, virtually all the young folk had to leave the Blasket and go elsewhere.  Most of O'Sullivan's friends and relatives went to America, but he ended up in Connemara, where he eventually wrote his story down in his native Irish just for the enjoyment of the people he knew.

O'Sullivan's childhood sounds idyllic for a little boy.  He spends his time avoiding school as much as possible, hunting for wildlife (for dinner), chasing sheep, and getting up to a bit of mischief.  Quite a lot of it is hair-raising, as he learns to hunt puffins by climbing down cliffs!  He tells about the life and customs of the island: fishing, hospitality, wakes, weddings, and dancing.

It reminded me quite a lot of the only other story I know about island life in the west of Ireland, which is a children's book, The Secret of Ron Mor Skerry, which was made into the film The Secret of Roan Inish.  The film spends a lot of time recalling a similar mode of life.

It's a lovely memoir and I think if you're interested in Irish history and culture, it's a must-read.  Apparently there are very few accounts of this kind of life, so we are lucky to have this one.
TBR challenge