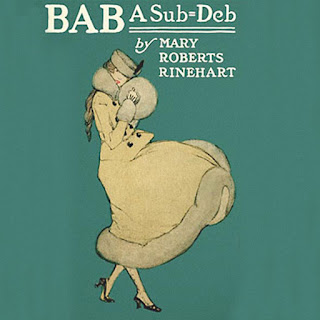 I downloaded and read this book (free) from Amazon after seeing Aarti's review.  And now I have a problem: I absolutely loved it!  But I can't figure out how to tell you about it without saying everything Aarti already said better.  So go read her post, and forgive me for my less-than-adequate words here.

Bab is 17 and a 'sub-deb'--she's stuck at school until her older sister is married off and Bab can come out herself.  Bab is not about to let that stop her, though--she's got things to do!  Like concentrating on her Career.  Or falling in love and worrying over whether this is The Real Thing.  Or, mostly, getting out of the  horrifying scrapes she is constantly getting into.

The whole book is written as Bab's essays or diary, complete with constant misspellings.  Don't let that stop you from reading a great book!  Bab is over-the-top hilarious, but she's also a real teenage girl you'll recognize.  And the spelling is often part of the joke.

I laughed so much while reading this; I'm sure I'll go back and read it again often.  I kept reading bits out loud to whoever was nearest.  Aarti already quoted all the bits I would have quoted, but I'll give you one:


When she had gone out I tried to think of some one to hang a love affair to. But there seemed to be nobody. They knew perfectly well that the dancing master had one eye and three children, and that the clergyman at school was elderly, with two wives. One dead.

I searched my Past, but it was blameless. It was empty and bare, and as I looked back and saw how little there had been in it but imbibing wisdom and playing basket-ball and tennis, and typhoid fever when I was fourteen and almost having to have my head shaved, a great wave of bitterness agatated me.

"Never again," I observed to myself with firmness. "Never again, If I have to invent a member of the Other Sex."
150+ Challenge 52 books