By Jean - July 26, 2012
This is another title I found listed at the Project Gutenberg Project blog (which is also where I found Bab: a Sub-Deb).  It's a very short book--really more of a pamphlet--written by an anonymous lady for a women's magazine.  This lady grew up in a log cabin with a large family and no luxuries, and then went to the big city to get an education.  There, she met and married her husband, who came from a wealthy society family and who was going into state business.  Suddenly she was living in a whole new world, one filled with social rules she had never been taught.  This little book contains her story and her position that social education should be part of education in every school:

I realized that social amenities are too often neglected in America, and our manners sometimes truthfully called crude. But I told myself with pride that our truly cultivated people will not tolerate a social form that is not based on human, kindly instincts. It was not until the World War flooded Europe with American boys and girls that I realized the glory of our social standards and the great need to have our own people understand those standards...

They are simple customs, and should be taught in every school in America, but I had not learned them....

If any one had told that girl the sacredness of the convention she had ignored, she would have suffered as keenly as I had suffered in my youth. It was such a simple thing to learn; yet who in the middle of a war would think of stopping to run a class in etiquette? The point is that any girl capable of crossing half the world to do a big job and a hard one in a foreign land should have been given the opportunity to learn the rules of social intercourse...

It's really a very nice little book that gives a vivid picture of life in the late Victorian era, and ends up just after World War I.  The author shows so much love and respect for her mother, who worked hard to provide for all her children and never had time or resources to teach them about the niceties of social life.  I really enjoyed this short memoir. 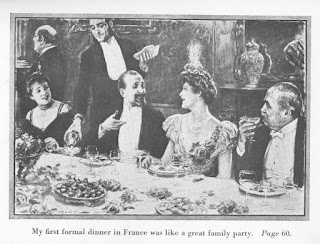 Because the memoir is largely a story of Victorian life, I'm going to count it for the Victorian celebration.

In other news, I'm still studying curriculum, but I've also picked up Doctor Zhivago, which I've really been wanting to read.  So far it's excellent (if a little full of a multiplicity of characters--I don't really have trouble with Russian names but there are an awful lot of them!), but I haven't been able to get too far into it yet.  I'm heading out on another road trip next week, so you probably won't hear from me much for a little while.
Victorian