By Jean - July 28, 2012
I've been trying to decide what books to take on my trip.  We'll be doing a whole lot of driving, so I figure I'll be able to do some reading, but it always works out that you don't read as much as you expect, right?  And it will be my job to keep the driver awake (I won't be doing any of the driving myself, because my co-pilot gets carsick if not actually doing the driving).

Anyway, I haven't read anything Greek lately.  I'd like to take Herodotus but the book is too huge for a road trip.  Euripedes is on my shelf, but in a library book.  Therefore I've decided to take Plato and Aristotle along for company.  Here they are, arguing away. 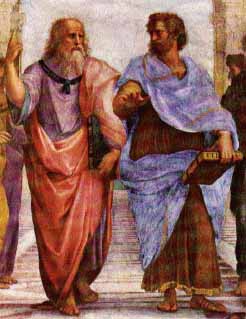 You can see that Plato is the older one pointing upwards.  Plato believed that ultimate reality was found in ideals, or Forms, that could not be found on earth.  We have the imperfect reflections of Forms here, but somewhere there is an ultimate reality which contains ideal trees and people and furniture.  Aristotle, the younger fellow, disagrees with his tutor and insists that reality exists in material objects that are knowable through experience--so he's gesturing towards the ground.

I have lots of other books I want to take along besides the two of the most foundational philosophers around.  Doctor Zhivago is going along.  I want to take Edith Wharton's The Age of Innocence, which is on my Back to the Classics list.  I think I will also take a medieval account kept at the Abbey of Bury St. Edmunds by a monk named Jocelin of Brakelond.  It looks rather friendlier than most such accounts and is a nice small book.

It's a bit silly to take any paper books along at all, since I have tons of good stuff on my tablet!  I thought my tablet was supposed to make a backpack full of books unnecessary on long trips.  I guess I haven't gotten used to that yet.
fun