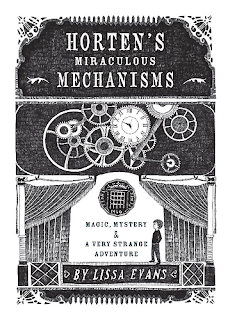 It's been a while since I had a children's book here--I've been in the mood to read lots of Serious Literature, I guess.  But I saw this at the bookstore and promptly wanted to read it, and happily the library had a copy.

Stuart Horten, age 10, is in a funk because his family has moved to a new town right at the beginning of summer, and now there are these nosy girls chasing him for their newspaper.  But it's not long before he finds a mystery to solve; 50 years ago, his great-uncle disappeared and was never seen again.  Stuart's dad ignored the clues Tony left behind for him to follow, but Stuart is going to figure out what happened!  Only things have changed an awful lot in 50 years;  things are changed or missing, memories have faded, and a very greedy person is on his trail.

I enjoyed the story quite a bit; it has a really nice atmosphere and mystery to solve.  It was very fun to read--I laughed out loud several times, and certain elements of the story reminded me of my beloved John Bellairs books (though there are no terrifying ghoulies).

One problem I had with this story is that it's set in the UK and it's not very British-sounding.  The American publishers edited it to make it more American, the way they did with Harry Potter books.  That always annoys me so much; it makes the flavor wrong, and it's condescending.  Publishers figure that American kids won't understand British-speak, but how will they learn to unless they read unedited British books?  It's not like it's terribly difficult or anything.

An example for you: Stuart ducks into a phone booth to hide, though they're called phone boxes in the UK.  But that didn't catch my eye much; it was the lady who yells at him "Because there's a line, you know!" that grabbed me, because a British person would say that there's a queue.  (I did actually find an online preview of the UK edition of the book, and sure enough, many changes have been made.  Boo.)
150+ Challenge 52 books