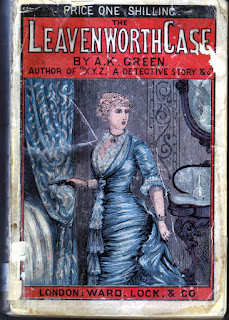 Here we have another tremendously popular and influential early mystery story--and again, it isn't British.  It's an American story--and here I'd been under the impression that Victorian mysteries were mostly an English phenomenon!  The Leavenworth Case was Anna Katherina Green's first mystery, published in 1878 (she turned to popular fiction after her poetry didn't sell too well).  Wikipedia says that Green was the first to come up with the idea of a detective that appeared in a whole series of stories.  She also invented the girl detective, paving the way for Nancy Drew, and the nosy, intelligent  lady amateur.   Although Green was a prominent woman in a field dominated by men, she appears to have disliked the feminist movement and was against women's suffrage.

The Leavenworth Case is interesting for its lack of sensationalism.  In an age when mysteries were practically always penny-dreadful-type stories filled with wildly improbable incidents, Green wrote a story that is reasonably plausible and which sometimes turns on fine points of law.

The action is narrated by a young lawyer assisting the series detective Mr. Gryce (who hardly appears).  It's a locked-room mystery; Mr. Leavenworth is found shot dead in his library, and clues point all over the place.  Two cousins are the main suspects--could it be the beautiful, self-controlled Eleanore, or the slightly less beautiful, materialistic Mary?

Mr. Young Lawyer is absolutely convinced that Eleanore is innocent despite all appearances that point to her guilt, but his main reason for his belief seems to be Eleanore's noble beauty, nothing else.  It's a little weird, though he does at least realize that it's weird.  The story is quite interesting, with several twists and turns.  If you enjoy early mysteries, this is an important part of the development of the mystery novel and is well worth a read.


PS: this book was read for the Victorian Celebration, not to mention the Classic Bribe 2012!
Victorian