As long as I couldn't settle down to read anything, I thought I might as well read the Communist Manifesto.  It's short, it's been on my TBR pile for a long time, and why not?

The Manifesto was written in German by Karl Marx and Friedrich Engels in 1848 to explain the aims of the Communist Party and distance it from other revolutionary movements of the time.  1848 was a volatile year.  In France, the Orleans monarchy gave way to the Second Republic; in England, Chartists rioted but made no headway; Denmark put limits on its monarchy; and all sorts of unrest was going on all over the world.  (That said, my edition gives the text from 1888 edited and with additional notes from Engles.)

Luckily, my little copy had some explanatory information which outlined Marxist theory and history.  Even though I know the basics of Marxism, I had a hard time making sense of the actual Manifesto.  Quite a bit of it is dedicated to explaining how other 19th-century revolutionary groups--mostly various flavors of Socialism--are completely wrong.  Other parts review history from the Communist point of view, and I must say it's the first time in my whole life that I've seen the rise of the middle class (in the medieval era) described as a bad thing.  But I often found it difficult to understand quite what the authors were driving at.

The points, as far as I can tell, were:

I suppose really I ought to read Das Kapital in order to understand what they were talking about, but it's apparently 3 volumes long--a daunting prospect. 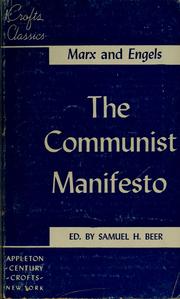 I got really tired of the word bourgeois.


My copy of the book dates from 1955, and is part of a series of very cheap paperback classics.  It's blue, not red!  I even found a picture of it, and here it is.  I have 3 or 4 books from this series that I picked up in used bookstores.
TBR challenge Victorian