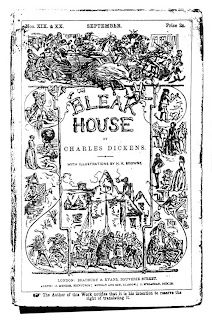 Zowie, I read a gigantic Victorian novel!  It's pretty much Allie's fault because of her Victorian celebration.  I actually knew very, very little of the plot before starting; I mean, everyone knows that Mr. Murdstone is in David Copperfield and Miss Havisham is in Great Expectations whether they've read them or not, but I didn't know a thing about Bleak House except that it sounded depressing and there was a BBC adaptation a couple of years ago (which I didn't want to watch because I hadn't read the book--now I would like to!).

It's a huge novel with a cast of thousands, but the center of the story revolves around Esther Summerson, one of Dickens' most virtuous pattern females.  Esther is the most humbly grateful person you'll ever read about, and if I hadn't known Dickens' love of improbably virtuous women characters, I would have thought she was going to turn out to be the secret villainess.

Esther observes the effects of Jarndyce and Jarndyce, a legal case that has dragged on for years.  It blights the lives of everyone involved.   Meanwhile there are some secrets about Esther's own past that come to light.  Everything is quite a tangle of suspicions, maneuvers, and forlorn hopes, and it's all quite interesting, though the legal critiques can get overlong.

The fun bit about Bleak House is, of course, the characters--their names, their foibles, all that Dickensian stuff.  Mr. Guppy and his over-formal language, the famous Mrs. Jellyby, Mr. Turveydrop with his Deportment, and all the others.  Mr. Skimpole is the one I'd really like to biff over the head.  There are an incredible number of characters, and they are nearly all interesting and individual.

These characters die quite often, and they pick the most amazing methods of dying.  I don't wish to spoil the story so I won't describe anything, but few of them die of anything you or I would recognize as a real thing that people die of.

I enjoyed it quite a bit and often had a hard time putting the book down--which is unusual for me when a novel is so long.  I'm impatient.  Now I would quite like to see the film adaptation and critique the characters and costumes!


I'm on a roadtrip for the next several days, so you won't see much from me.  Amy at Book Musings just gave me an award, which was a nice thing for her to do, and I'll get to that when I can.  Meanwhile I'm trying to read my WWI history book, but it's a lot easier to read a Victorian thriller on my tablet when hyper kids are running around and we're planning to shoot off fireworks and all kinds of things.  Happy Independence Day to my American friends!
classics Victorian