Summerbook #10: The Forest of Enchantments 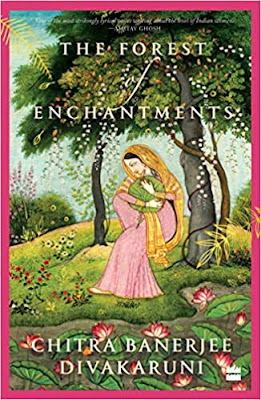 The Forest of Enchantments, by Chitra Banerjee Divakaruni
I have been looking forward to this book for SO LONG.  And then when I got hold of it, I delayed reading it because I was looking forward to it so much, which is a silly habit of mine.  But I saved it for a summer treat, and wow, it was great.
Ten years ago, after Divakaruni wrote The Palace of Illusions, she said that her next project would be the story of Sita from the Ramayana.  Then it was really difficult to get started, because Sita is a hugely important figure, and one that just about all Indian women have to reckon with.  Sita is the embodiment of perfect womanhood and wifehood, and girls are often told "May you be like Sita."  But a lot of times that carries the meaning of 'be meek and mild and put up with everything,' because Sita is often held up as more of a Griselda-like model.  A deep dive into the story of Sita, however, reveals a woman who is brave, strong and determined, and Divakaruni wanted to show her that way.
The story of Sita is long and complex, and I can hardly do justice to it here.  She marries the prince of Ayodhya, Ram, and he is determined to be a perfectly righteous king one day, so correct and holy that nobody can ever point a finger at him.  But his stepmother's scheming results in Ram's exile to the forest for 14 years.  Sita and Lakshman, Ram's devoted younger brother, go with him.  Near the end of the exile, a demon king, Ravana, abducts Sita and takes her to his magic kingdom of Sri Lanka.  He wants her to become his wife, but she refuses and spends months waiting for rescue.  Ram and Hanuman save her, but Ram tells her that since she 'lived' with another man, she can no longer be his wife.  Sita proves her innocence, but when rumors start floating around Ayodhya, she is exiled anyway, to raise twin sons in the forest.  Just how much should she endure?
Sita's voice is wonderful in this novel, and she keeps trying to understand the nature of love.  What should she do for those she loves?  What happens when love pulls her in different directions?  How much should she sacrifice?  How much should she forgive?  She understands Ram and how important it is to him to be a righteous king, and she supports him in it -- Ram is in fact an incarnation of Vishnu -- but they do not always understand righteousness in the same way.  Sita ponders a lot on how this all works, especially on unjust accusations.  There are a lot of unjustly accused women in this story, who react in different ways.
Of course I can't tell you the ending, but I sure wish I could just quote it all here.  Divakaruni tells it exquisitely, drawing the thread of her story through a needle's eye in a way that could so easily miss, blending love and forgiveness with a refusal to be mistreated.  It will bring out the tears, but this isn't a tearjerker just for fun; it's asking some very difficult questions.
If there's one thing I really regret about this novel, which is so wonderfully written, it's that not a lot of men will read it.  Divakaruni has always told the stories of women, and I wish men in general were more willing to read them.  Women are not the only ones who could enjoy this novel and take real meaning from it.
Here are just a few of Sita's developing thoughts on the nature of love:

...the more love we distribute, the more it grows, coming back to us from unexpected sources.  And its corollary: when we demand love, believing it to be our right, it shrivels, leaving only resentment behind.
So, this, too, was true of love: it could make us forget our own needs.  It could make us strong even when the world was collapsing around us.
...it's not enough to merely love someone.  Even if we love them with our entire being, even if we're willing to commit the most heinous sin for their well-being.  We must understand and respect the values that drive them.  We must want what they want, not what we want for them.
...once mistrust has wounded it mortally, love can't be fully healed again.
That's how love stops us when it might be healthier to speak out, to not let frustration and rage build up until it explodes.
Truly love is the strongest intoxicant of them all, the drink of deepest oblivion.  Else how could I have forgiven him so quickly for what he'd done?
No. Love is the spade with which we bury, deep inside our being, the things that we cannot bear to remember, cannot bear anyone else to know.  But some of them remain.  And they rise to the surface when we least expect them.
I bore the rakshasis no ill will because I'd never loved them, and they'd never pretended to love me.  Forgiveness is more difficult when love is involved.
When Ram saw what had transpired, he looked at me newly, with a different, considering gaze. Even as I basked in his admiration, I realized that until now, he had appreciated me only for qualities that he thought of as womanly: beauty, kindness, the skills to heal plants and animals and humans-- and even rakshasas. The power to make him fall in love with me. He admired the fact that I'd repaired the relationship between Kaushalya and King Dasharath, bringing them closer. He was impressed because I created a beautiful home for us in harsh wilderness. But he considered them all to be domestic skills. Now, for the first time, he looked at me with respect, the way one might gaze at an equal... What I'd taken as admiration all these years had really been a kind of indulgence, the way one might praise a child for childish achievements. The womanly skills I'd mastered were important and intricate, and by no means easy.  They required deep intelligence, an intelligence of the heart.  [abridged for length]