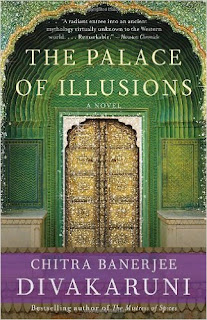 I had the opportunity to meet Chitra Banerjee Divakaruni a few months ago, which was a very exciting event, and so I decided that it was high time I finished the only Divakaruni novel I had not read--Palace of Illusions.  I got about halfway through it several years ago, and I was convinced that something completely terrible would happen to Panchaali, the protagonist, and I just couldn't keep reading!  But this time I did it, and it's a great novel.

This is a retelling of many of the events of the great Indian epic, the Mahabharata, from the point of view of Draupadi (or Panchaali, as she is called here), the wife of the five Pandavas.  If you're not familiar with the basics of the story, it's about two sets of cousins: the five Pandava brothers, who are rightful heirs to the kingdom of Hastinapura.  Their uncle, the blind king Dhritarashtra, wrongfully appoints his son, the eldest of the hundred Kauravas, king instead, sparking a dynastic struggle that results in a massive war.  It's a massive, sprawling tale, and it seems that everyone in it has a miraculous story.  Draupadi is born miraculously from a sacred fire, grows up to marry five husbands at once, and is a catalyst for the war.  What would the story look like from her perspective?

I've always had a bit of an interest in Draupadi, though I didn't really know anything much about the subject.  I had some Indian comic-book versions of famous stories when I was a kid, and one featured a pivotal moment in Draupadi's life.  Her eldest husband is wise and calm, except when he starts gambling.  One night he loses control and forfeits his entire kingdom, his brothers, and his wife.  The rotten cousins decide to humiliate her by pulling off her sari, but when she calls upon Krishna, she is miraculously clothed in sari after sari.  This scene made enough of an impression on me that I really wanted to read Draupadi's story and find out more about her.

Divakaruni brings Draupadi to life, showing her as an ambitious but heedless girl who longs to do something important.  Surely being born from a sacred fire means that she'll have adventures, but it seems that her father plans to marry her off like anyone else.  She does get her adventures--and a name change to Panchaali--but they come with a higher price and more hardship than she ever thought possible.  Panchaali lets her experiences embitter her, and she becomes obsessed with exacting retribution for her sufferings.  She pushes her husbands into action, and does things that have terrible consequences.

This is a great novel, though I still found it hard to read because terrible things do happen, just like I thought they would.  Well worth reading!
Indian literature mythology