One of my all-time favorite children's authors is Lucy M. Boston, author of the Green Knowe series of books.  I wrote about her in the Children's Literature series, and I also once mentioned The Children of Green Knowe in a post about my favorite Christmas stories.  The stories are based around Boston's own house, a small Norman manor built around 1130 and one of the oldest continually-inhabited houses in Britain.  Of course, it was changed up a bit through the centuries, but most of it is still there.  Today, Lucy's daughter-in-law Diana Boston runs the house as a museum that is also her home, and people visit for the history, the garden, the books, or the beautiful patchworks Lucy sewed.


We were fortunate enough to be able to walk to the Manor from our B&B; it's only about a mile and there is a public footpath.  Our hosts are friends with Diana, and knew Lucy well too, so we had a nice talk about it!  We walked through the village, across some fields, and then along the river.  There were some canal boats moored along the way, and we saw the swans with their babies again too. 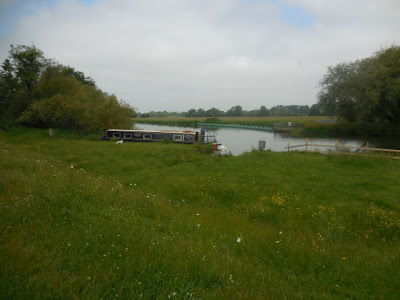 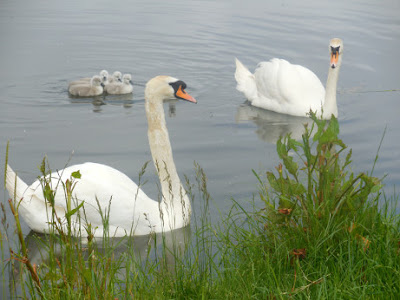 There is a gate to the Manor grounds along the river path, and we entered there--just like Tolly does in the book.  It's sort of the back gate and you walk through the garden, but the entrance to the house is now on that side. 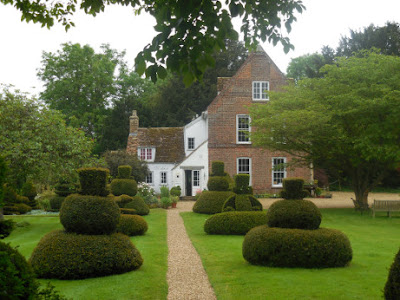 We had arranged to get there a little earlier than Diana usually opens, because we had to hit the road in the afternoon.  So we arrived at 9am and spent the first hour in the garden, just exploring.  There are two acres, and a lot of it is garden!  There are also several wildernessy bits, with water too; this turned out to be the remnants of the old moat.  The garden was spectacular, because the irises were late and were all in bloom, and the roses were right on time and blooming too.  There were also lots of other flowers, some of which I'd only read about in books. 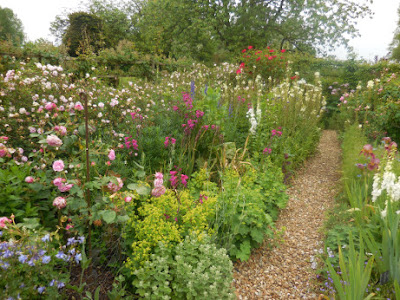 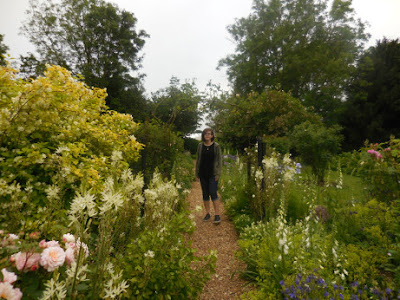 Lucy started off with no garden at all, and the first things she planted were some yew bushes, which she later clipped into shapes that eventually became chess pieces.  Then there is a lot of open garden with flowers, and also a "Hidden Garden," which is more like a progression of rooms you enter one after the other.  This is on the side with the old moat, and there are things to discover like a yew deer, stone markers, bamboo clumps, and so on. 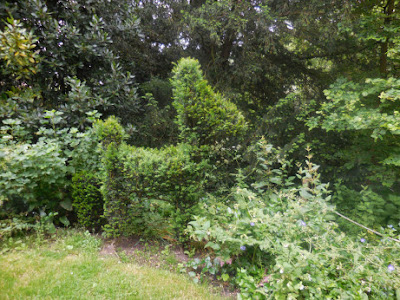 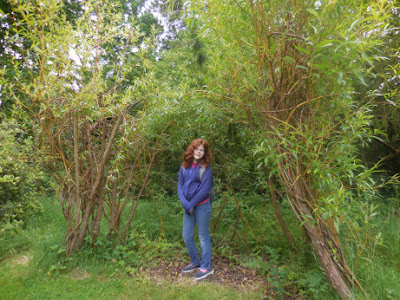 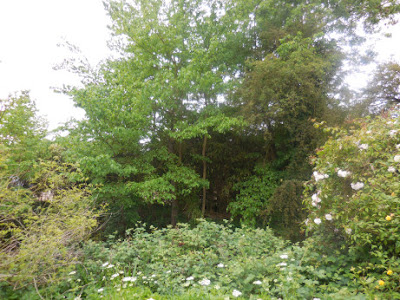 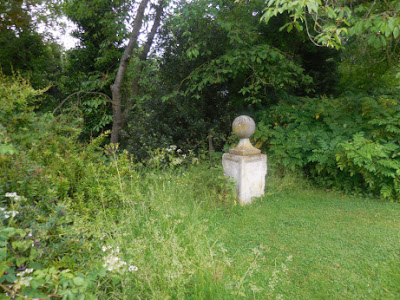 When the other members of the tour arrived, Diana first gave us a history lesson about the house, explaining how one end was changed to brick (the house was expanded with brick in the 1700s, and then burned down only 80 years later, leaving the stone core behind) and modern lean-tos form some of the house as well.  You now enter through the old scullery, so there is a sink in the hall.

The entrance hall is almost exactly as described in the books, and contains lots of things.  Lucy was something of a magpie and collected all sorts of bits and bobs, both man-made and from nature.  So the cherub's heads, the bird's nests, and even Feste's name board are all there. 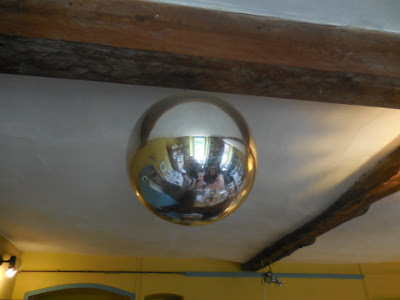 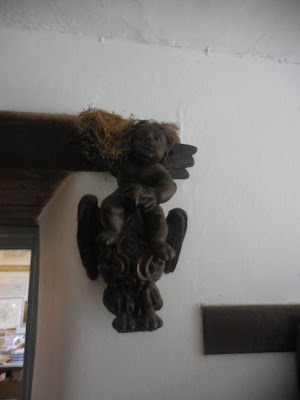 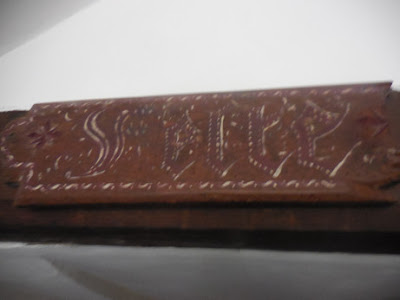 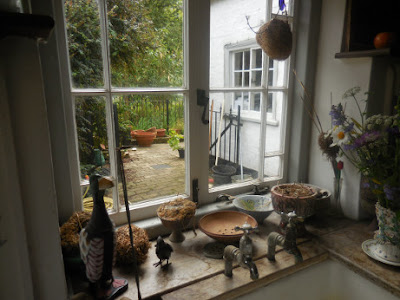 We then went into the living room, I guess you'd call it; it has a massive fireplace with a chimney going straight up so you can see the sky if you duck down and look.  Lucy bought old patchworks to use as curtains, and that's how she got into sewing patchwork.  The prop patchworks used by Maggie Smith in the movie are also kept here.  The hair embroidery is there, except that it was made by Napoleonic prisoners of war and is of a grand house with a carriage being driven in front.  It looks like an ink drawing. 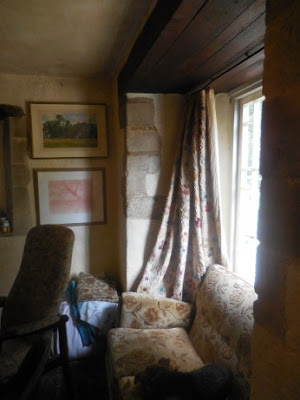 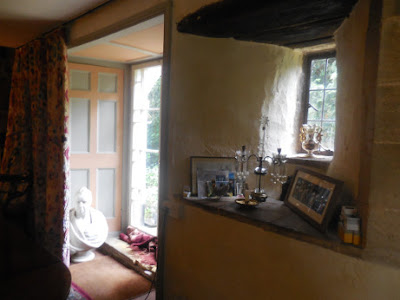 We went upstairs to the quilt room, which is part of the modern lean-to and thus has a Norman window in the inner wall.  I got to put on cotton gloves and help turn back the patchworks, which are layered on the bed.  The technique and artistry in these is truly amazing, but I'll be telling you about that in another post.

Up more stairs, past the Guardian of the House (another book, not easy to come by now), into Diana's own bedroom, which is on the upper, main floor of the Norman part of the house.  She let us into her own bedroom!  Talk about generosity.  Here were the original artworks for the books by Peter Boston.  Imagine living in a Norman house and looking out these arched windows every day!  The mind boggles.  The upper part of the house is cut in half by cupboard/closet space, but one of the closet doors is actually a door to the passage and into the other half of the hall.  We walked by the original fireplace, now blocked up, into the music room.


The music room has the original entrance to the house, which was on the upper floor and had a wooden stair leading to it.  In case of attack, you could get rid of the stair, and the lower floor was for storage.  Now, the door leads to a balcony that is too old to bear occupants.  We could also see the original beams of the house in here.  The Tudor renovators had knocked out some things, and Lucy had to put some supports.

The rest of the room is devoted to music; Lucy had quite a special gramophone and a massive collection of music brought from Vienna, and during World War II she invited the local RAF officers to come and listen a couple of evenings a week.  The room is still the same, with mattresses for sofas and even an old car seat, because it was all very makeshift.  Diana played the gramophone for us; the horn is about three feet across and the needle is of bamboo and has to be trimmed every so often!


Up a final narrow staircase, you enter the attic room, which is the children's bedroom.  It is exactly as described in the stories, from the giant Chinese lantern outside the door to Toby's mouse, the toy chest, the birdcage and the crack in the floor, everything.  It's a room any child would really want to live in!  And you can see and touch the original 900-year-old roof beams. 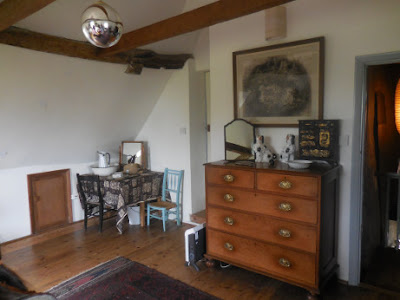 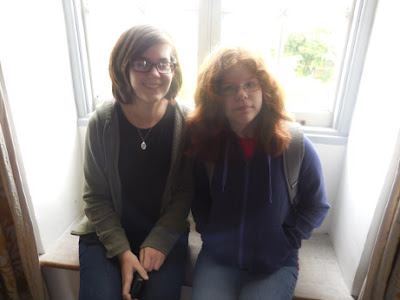 It was quite a thing to visit a house that people have lived in for nearly a thousand years. Diana said that a few weeks previous, some folks had started discussing Brexit during their visit and she had responded that they were sitting in a room where people had discussed the discovery of a new continent, the Civil War, and all sorts of events.

Lucy Boston was pretty genius at her own special arts.  She produced a very lovely garden out of nothing much, sewed patchworks that were works of art, and wrote books that deserve to be read more widely than they are.  She did all of this work after she turned 60, which I guess shows that it's never too late to start anything.

The whole thing was just incredible.  I am quite sure that when Diana married her husband years ago, she did not mean to sign up for spending her life maintaining and showing a historical treasure, caring for her mother-in-law's legacy, and letting everybody into her bedroom all the time.  She does it with great kindness and generosity.  To visit the house and garden, still lived in and not really a museum, was a unique experience we will never have again; there is simply nothing like it anywhere else.